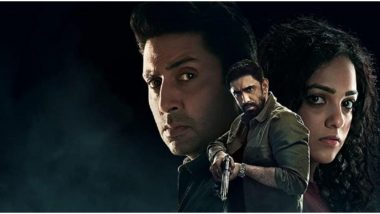 The second season of Amazon Prime Video India's hit series, Breathe, has begun streaming on the platform from July 10. So if you are planning to watch the new season, called Breathe Into The Shadows, and have not done so, please do not read ahead. For the article below is full of spoilers about the new season, especially the ending. The first season had Amit Sadh's Crime Branch officer Kabir Sawant involved in a series of murders, that was orchestrated by the character played by R Madhavan. Breathe Into the Shadows Review: Amit Sadh Steals the Show From Abhishek Bachchan in This Engaging but Uneven Thriller Series.

In Breathe Into The Shadows, Kabir Sawant is back, and this time he is involved in a case of series of murder happening in Delhi, with a upper-middle couple, played by Abhishek Bachchan and Nithya Menen, in the middle of it all. The Sabharwals - the husband, a psychiatrist and wife, a chef - have their little daughter kidnapped by a mysterious stranger. For nine months, the frantic couple try their best to locate the child, but to no avail. And then, out of the blue, they are contacted by the kidnapper who wants them to kill certain targets based on Raavan's ten sins. While the couple reluctantly carry out his bidding for the safety of their daughter, Kabir tries to figure who is behind the killings.

Here comes the spoilers. It is later revealed (in the fifth episode itself) that Avinash had kidnapped his own kid (along with a medical student, Gayatri, to take care of her). In the sixth episode, we get to know the reason behind the kidnapping - Avinash suffers from Split Personality. Yup, you can groan now! Thanks to his childhood trauma and an accident, he has an alter-ego, a frustrated and possessive J, who has a limp and is protective of Avinash. It is J who had kidnapped Avinash's daughter, while Avinash is oblivious of his existence. Apparently, J's reason for doing the crimes, against people who hurt him or Avinash in the past, is that people care about Avinash more, while he has to stay in the shadows.

The final episode has Kabir and Avinash's wife Abha find out about Avinash's MPD and that J had kidnapped Siya and Gayatri. Avinash/J is arrested and is later sent to a psychiatric facility. Abha, who helped Avinash in the three murders, and being more involved in that of Natasha's (Shruti Bapna), is let go off, because Kabir lies in his report so that Siya can have at least one parent. Breathe Into The Shadows: Aishwarya Rai Bachchan Says 'Shine On Baby' as Abhishek Bachchan Makes His Digital Debut.

The narrative shifts to three years later, when Abha visits a bearded Avinash who is still in the facility. He yearns to meet Siya, but Abha tells him that their daughter is scared of not being sure if the person she meets would be her father or 'Bad Uncle'. Avinash reminds her that he hasn't gone into 'J' mode in the past one year, but Abha isn't very keen. Later, Shirley (Saiyami Kher), a sex-worker who was very close with J, meets him at the hospital. Before she leaves a silent Avinash there, he leaves a scrap of paper in her hand. Later, he is seen limping towards the stage during a function at the hospital, before the screen cuts to black.

So what does that mean?

Yup, despite Avinash's assurance to Abha, J does an Anniyan on the audience, and returns in his mind. And what's more, since Abha has left him (presumably) for the sake of her daughter and Shirley yearns to meet J, it looks like J has taken full control over Avinash's mind. Thus, making Avinash a secondary (or trapped) entity in his own mind. And yeah, he is also planning to escape from the hospital.

Whether it is to be Shirley, the only person who loved J, or to get back to his family, it is not made clear. But our bets are on the former.

Earlier we mentioned that Avinash, or rather J, gave Shirley a folded piece of paper. When she opens it while walking away, it reads 'C-16'. There is a discernible smile playing on her lips, after reading it, which means she realises that J is back. So what does that message mean?

Interestingly, 'C-16' is also the name of the episode. Taking a guess here - although it might not be shown properly in the series - C-16 might be the number of the room in the hotel where Shirley takes J for their rendezvous. Since we didn't see J talk much about himself to Shirley earlier and that she realised that it is J who wrote that scrap of paper, the hotel room number could be the closest thing that C-16 could mean. What say?

(The above story first appeared on LatestLY on Jul 10, 2020 10:10 PM IST. For more news and updates on politics, world, sports, entertainment and lifestyle, log on to our website latestly.com).