Call My Agent Bollywood: Dia Mirza, Lara Dutta, Jackie Shroff- All The Cameos In The Netflix Series You Need To Know About

Call My Agent Bollywood doesn't get a lot of things right but a few things that work in its favour are the cameos. Most of them are good and fun while there are some which didn't get their due. 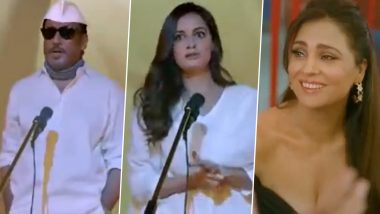 Call My Agent Bollywood is streaming on Netflix. It is an Indian adaptation of French comedy-drama series Dix pour cent which deals with a celebrity management agency and their talents. The series has been written in a rather silly way which takes you back to many movies in the industry that you may have watched. It seems, in Bollywood, it is still in 2010.  Call My Agent Bollywood Review: Juvenile Writing And Dated Subplots Make This Netflix Series A Yawn-Fest.

Anyway, since everything has a good side too, apart from the performances from the principal cast, the cameos were just stellar.

Dia looks ethereal and graceful. She enacts the character of an actress who is short changed due to her age by a Hollywood producer. Her moral dilemma about whether or not to go under the knife, has been superbly demonstrated.

Lara Dutta plays an actress who can't default on her taxes anymore and is forced to consider assignments that go against her comfort zone. While it's a bit over-the-top, her protective attitude towards her kid is a refreshing change from what we are used to seeing in shows that talk about the industry. Generally, a neglectful actress mother is a preferred trope in all of them.

Jackie is seen shooting a movie he probably used to do in the late 80s wearing a cop uniform. It's not the movie that's amusing here but the way Shroff carries himself. He is exactly what you see in real life. Fun, happy, making his favourite statements like Mausi chi...

Although we don't know why director Shaad Ali thought showing Nandita making a Farah Khan kind of movie will be funny is beyond us, the filmmaker does a fantastic job at it. Nandita can be a fantastic addition to a satirical comedy film.

Akshara Haasan and Sarika appeared in an episode together. They make the cutest mother-daughter pairs on screen. They keep it simple and interesting.

Farah Khan does the usual cameo appearance that she does in other movies or shows. She belts out some cocky one-liners, talks about a movie script and makes some really funny faces. Despite being a character that we have seen a lot of times, Farah's antics never gets old. Call My Agent – Bollywood: Soni Razdan Opens Up About Her Upcoming Netflix’s Show, Says ‘Good Script and Casting Gives Senior Actors Great Opportunity’.

More than Dhulia, it's his nickname Tishu which was heard at every instance in the episode. Whenever he appeared on screen, he got the gritty filmmaker look bang on!

The lovebirds play the characters of an eccentric couple who fight on the set of their movie together. Don't know about the performance but that kiss was fiery hot, literally!

Two actresses are shown as rivals and their fight is termed as catfight. That's all these two fabulous ladies lend to the series, unfortunately and tragically.

Tinnu Anand played the boss of the agency who unfortunately dies during a vacation due to an overdose of aphrodisiac. He could have added more but his role was quite small to have an impact.

(The above story first appeared on LatestLY on Oct 29, 2021 09:40 PM IST. For more news and updates on politics, world, sports, entertainment and lifestyle, log on to our website latestly.com).