Devi Review: Kajol, Neha Dhupia, Shruti Haasan's Short Film Will Make You Question the Society that You Live in 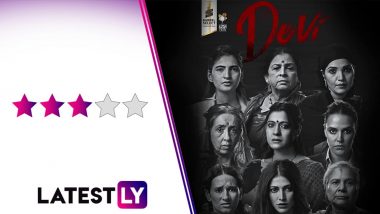 What's the beauty of a short-film? Well, if well-made it has the power to hit the right notes with minimum content. While there are tons of beautiful short film that we have seen in the past and on varied subjects, Devi, that stars Kajol, Shruti Haasan, Neha Dhupia, Neena Kulkarni, Mukta Barwe and others is a powerful, impactful and pinches your heart to wake up and realise the scenario around you, that's not safe for any woman. Imagine a society where women are pushed into the sisterhood owing to the situations or should we say exploitation that they went through. It's disheartening, scary and alarming. Devi: Shruti Haasan Says Being a Part of Kajol, Neha Dhupia’s Short Film Was ‘Memorable and Enriching’.

The 13-minute-long movie basically takes place in a room that's occupied by nine women. Though they belong to different age brackets and come from different strata of society, they are woven together by a common thread -  exploitation and agony. The premise though confusing starts making sense after a point and towards the end, you are left with nothing but a lump in your throat. You even thank your stars for not being a part of this group, even pity them at times but in the end, you question the mere society that you live in. The society that still struggles to find a safe haven for women.

Direction by debutante Priyanka Banerjee is convincing. She hits the right notes, raises the correct issues and highlights the plights of being a woman. The women living in that house are victims and yet they are trying to move on, help each other and stay strong. Their discussions give you goosebumps and you know they aren't lying or exaggerating. It hits you like a huge blow and you end up appreciating the privileged background that you were raised in.

Coming to performances, it would be unfair to praise a few names for they all were so commendable. The ladies put out a strong act and they are convincing as strong, resilient women who were once a victim. Kajol, Neha Dhupia, Neena Kulkarni, Shruti Haasan, Mukta Barve, Shivani Raghuvanshi, Sandhya Mhatre, Rama Joshi and Rashaswini Dayama have managed to engage the audiences with their natural act and seeing them perform is always a delight for our eyes.

Speaking of cons, the premise though we have a fair idea takes time in establishing itself. It's unclear initially but as the director starts painting her picture on the small screen, you start seeing the colours from her eyes and eventually end up praising her art. It could have been sharper or could have had more depth to it. The effort deserves a round of applause and the way the director has decided to discuss the issue and establish a narrative is unique but it certainly had ample of scope to go from being good to the best.

An unusual way to discuss a usual storyline

The plot could have had more depth

The premise could have been clearer

There's no denying that Devi deserves to find a place in your 24-hour schedule. Sleep 13 minutes late if you want or lie about taking a power nap in between your work but go ahead and witness this unusual story that's so usual in our society.

(The above story first appeared on LatestLY on Mar 02, 2020 08:13 PM IST. For more news and updates on politics, world, sports, entertainment and lifestyle, log on to our website latestly.com).