Dil Bekaraar Review: This On-Screen Adaptation Of Anuja Chauhan's Novel Is A Delightful Love Letter To The '80s (LatestLY Exclusive)

The 80s is perhaps one of the most eventful decades in India's history from politics to cinema. Dil Bekaraar attempts to capture that and much more in a delightful manner, although it does have its share of flaws. Check out the review to know what 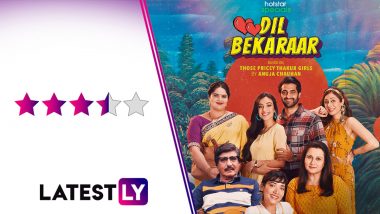 Dil Bekaraar review: The 80s, the disco dancer, the introduction to Shah Rukh Khan, Aamir Khan and Salman Khan, the beginning of Doordarshan, and so much more. It is perhaps the most eventful decade in India's history from politics to cinema. Dil Bekaraar attempts to capture that and much more in a delightful manner.  Dil Bekaraar: Padmini Kolhapure Talks About Reuniting With Raj Babbar, Poonam Dhillon on the Upcoming Disney+ Hotstar Romantic Series.

Based on Anuja Chahuhan's novel 'Those Pricey Thakur Girls', the show begins with Debjani (Sahher Bambba) getting selected to be a news reader with Deshdarpan (modelled on Doordarshan) after she quits several jobs in quick succession. But she fumbles during her first bulletin and journalist Dylan Shekhawat (Akshay Oberoi) slams her in an anonymous review on his newspaper after having an altercation with her. But soon enough they become friends and later, a little more than friends. The other Thakur girls, Anjini (Sukhmani Sadana) is in a strained marriage, Binodini (Anjali Anand) keeps covering up her husband's failed attempts at business by airing her insecurities, while the youngest sister Eshwari (Medha Shankar) is juggling a basketball and teen romance.

Written by Suhani Kanwar and Ruchika Roy and directed by Habib Faisal, Dil Bekaraar has some really heartwarming moments. In fact, it's a been a while since we have watched a feel good series and nostalgia fits right into this category. The episodes are very smartly stitched together. Every Thakur girl is introduced in subsequent episodes which gives all of them enough time to establish their characters. The pace of the series is slightly sluggish which works perfectly with the characters and story buildup.

The legitimacy of print over video news summarised in this line “video news (TV) is like a colourful cocktail with no substance and lots of entertainment, whereas print news is like a good whiskey on the rocks with actual news," make you realise with news, nothing changes, irrespective of the decade. Then there are some superb insertions of golden oldies which would make you clap. Dil Bekaraar Trailer: Raj Babbar, Poonam Dhillon’s Disney+ Hotstar Series Promises a Light-Hearted ’80s Drama With a Twist! (Watch Video)

However, there a few flaws which threaten to overshadow the feel-good feeling. Parents choosing 'settling down' over successful careers of their kids is a common Indian theme cutting across decades. Repeating it in every episode is unnecessary and yet Dil Bekaraar makes a huge production of it. Then the whole 'nation wants to know'... would it have been a huge job had they rested this line for a series based in the 80s? Anuja Chahuhan often tries to include a controversial subplot in her romantic comedy novels. Here, Bhopal Gas Tragedy finds a place in the narrative. It should have received a little more attention the just a passing reference. Hopefully, there will be a season 2.

The 'masterstroke' here is the cast. Getting yesteryear stars like Raj Babbar, Poonam Dhillon, Padmini Kolhapure and others for the characters from the 80s was the right decision. They don't just look the part but do a swell job at it. Sahher Bambba looks beautiful as Debjani and makes the most of the opportunity. Akshay Oberoi as the truth-seeking journalist is just perfect and so is the rest of the cast. But Medha Shankar's spunk just stands out!

-great treatment of the subject

Dil Bekaraar leaves you delighted with its nostalgic moments from the 80s but should have treated a few sub-plots well. The series streams on Disney+ Hotstar.

(The above story first appeared on LatestLY on Nov 28, 2021 10:12 AM IST. For more news and updates on politics, world, sports, entertainment and lifestyle, log on to our website latestly.com).