Shah Rukh Khan's Zombie horror series Betaal will stream on Netflix from May 24. It stars Viineet Kumar and Aahana Kumra among others and is directed by Patrick Graham. 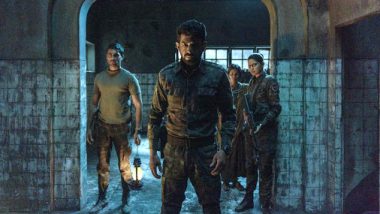 After Bard Of Blood and Class Of 83, Shah Rukh Khan's Red Chillies Entertainment co-produced a zombie horror series Betaal with Viineet Kumar and Aahana Kumra in the cast. The show will premiere on Netflix on May 24. Today, the SRK's production company shared the first look of the series which has created a lot of interest in people ever since word got out.  The first look of the show gives you the feel just right. A dark, unkempt space that seems like a washroom and with four people showing a range of emotions. Aahana looks visibly confused and also a bit irritated, Viineet seems to be the brave one here trying to take one step closer to whatever is ahead of them, while the other two seem to be waiting for the command. Shah Rukh Khan Celebrates Betaal Wrap-Up Party With Aahana Kumra, Vineet Kumar and Others – View Pics

Betal is written and directed by Patrick Graham. It is also co-directed by Nikhil Mahajan. It will be co-produced by Verma, Red Chillies Entertainment and Netflix. Blumhouse Television and SK Global Entertainment are involved as Executive Producers.

Patrick Graham had earlier directed Ghoul starring Radhika Apte which found appreciation. Guess his deft handling of this genre could make this series a winner too,

(The above story first appeared on LatestLY on May 05, 2020 12:29 PM IST. For more news and updates on politics, world, sports, entertainment and lifestyle, log on to our website latestly.com).