Game of Thrones Season 8: Jon Snow or Arya Stark - Who Will Kill Daenerys Targaryen in the Finale Episode? Vote Now 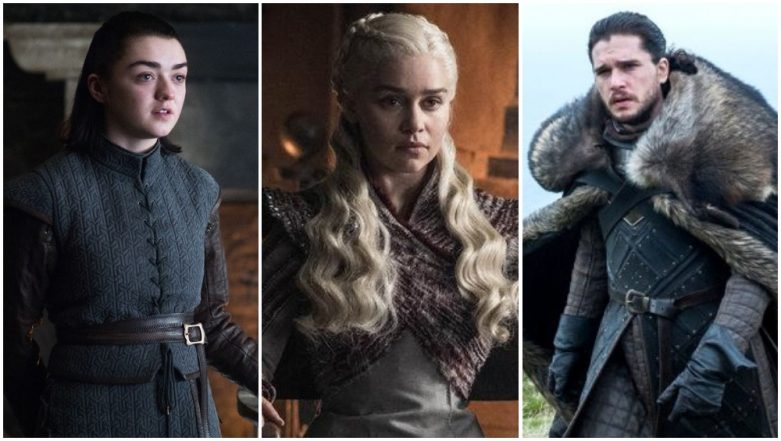 The Game of Thrones finale is barely a week away and stakes are really high on who will claim the Iron Throne. With Cersei Lannister out of the picture (thanks to Daenerys Targaryen's wrath), it's only natural that the Mother of Dragons is on her way to claim her right. But that would be too predictable, right? And the GoT writers certainly hate this word. The Battle of King's Landing was a rather one-sided affair with Drogon avenging the death of his brother, Rhaegal. But the road ahead isn't a cakewalk for Daenerys. Game of Thrones Season 8 Episode 5: Twitterati is Unhappy with Daenerys Targaryen, Tag her the 'Mad Queen'.

Jon Snow was clearly unhappy and shocked by the recent turn of events. Though he's fiercely loyal to his queen and that's something we're tired of hearing, yet the teachings of Ned Stark are still so fresh in his mind. There are chances that Dany's beloved Jon will kill her in the season finale to avenge the death of all the innocents. No, he never wanted the throne but he would certainly not let a mad ruler rule the seven kingdoms. He has seen Daenerys at her worst and there's no way he would risk the future of seven realms. Yes, it's unlikely that he'll betray his queen, yet, he's smart enough to predict the future under her rule. Game of Thrones Season 8 Episode 5: Fans are Mighty Disappointed With the Outcome and We Totally Agree With Them.

Coming to Arya, well, she was determined to kill Cersei and Daenerys was never on her infamous list. However, after the tragic turn of events, Arya is capable of adding a new name to the same list. And let's not forget what Melisandre had predicted for her. In Season 3, during her brief encounter with Arya, she had said, "I see a darkness in you. And in that darkness, eyes staring back at me: brown eyes, blue eyes, green eyes. Eyes you’ll shut forever.” Now brown eyes meant Walder Frey, blue eyes meant the Night King and green eyes were then predicted to be Cersei. However, since Arya got no opportunity to kill Cersei, the green eyes could be a reference for Daenerys Targaryen. And seeing the Stark child's badass side this season, we don't really doubt her.

However, since Hound explained to her what revenge does to people, she may unwillingly return to Winterfell. But that's not the Arya we know, right? While fans believe Jon will do the honours, do you think Arya will emerge as the MVP of this season? Tell us your prediction by voting below.

Who will kill Daenerys Targaryen?