Grahan, a DIsney+Hotstar show inspired from Satya Vyas' novel Chaurasi, has been well accepted by many. But when the trailer released th survivors of the anti-Sikh riots in Bokaro sent a legal notice to the makers and wanted a ban. Director of the show Ranjan Chandel reveals why he wasn't worried about it at all. 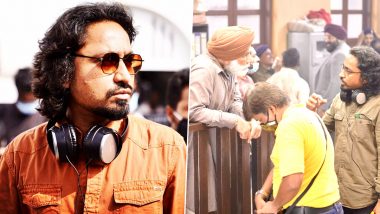 Disney+Hotstar's recently release Grahan is getting a lot of attention. The series is inspired by Satya Vyas' novel Chaurasi. It talks about the fateful night when anti-Sikh riots broke out in 1984 post Indira Gandhi's assassination. It is a love story between Rishi and Manu which sees a tragic end. But the moment the trailer was released, many on social media raised concerns that it was maligning the Sikh community. Director Ranjan Chandel in an interview with LatestLY reveals that all those who had issues with the series have infact  apologised to him for misunderstanding the context after watching the series. Grahan Review: Zoya Hussain, Pavan Malhotra’s Web-Series Is an Affecting Recollection of the Horrors of 1984 Riots (LatestLY Exclusive)

Chandel says, "People started reacting mostly on social media which these days have become easy. They sit at home and put a hashtag on it. It was completely misundertsood. But I wasn't worried because I knew what was our intention behind the series. We have handled it very sensitively. Infact, people who had raised alarm earlier, sent us messages after watching the show. They apologised for misunderstanding the series initially." Chandel doesn't really consider that as a controversy at all. For him, it was just a few people who misunderstood and after watching the series, they realised they were wrong.

But the recent controversies and calls for bans on several web series have put a huge question mark on what people can make. Recently, Sunil Grover admitted that he is very carefully about what he picks up next after the Tandav incident. Chandel too feels channels, filmmakers and others have become very conscious now. But he also argues, "Makers should understand what they are making. If their intention is to register ther voices through their work, one should be ready for consequences."

Coming back to Grahan, the series doesn't really explain why Rishi Ranjan played by Anshuman Pushkar and Pawan Malhotra in two different timelines, decides to become Gur Sevak after that night. It's mostly left to assumption. When Chandel was asked to throw some light on it, he admitted that it's a fair point. "Rishi becoming Gur Sevak is not illogical. It's deeply spiritual and has a sense of redemption. It's a fair point and  I accept your opinion. But I think Rishi didn't torment any Sikh in reality. He infact was trying to save them. For him it was more about what happened to Manu and what his friend did."

When asked if Grahan could have a season 2, Chandel reveals that there could be one but at present there are no plans. That's because Vyas' Chaurasi has been presented in the first season and the second will need to have a fresh story. Chandel also reveals that the series doesn't completely borrow every scene from the novel.

"Chaurasi by Satya Vyas is purely a love story between Rishi and Manu with the 1984 riots in the background. In fact, it didn't even have Manu's assault scene or Amrita and Gursevak. We fictionally developed it for the series. In the book, they seperate after that fateful night and at the end they hint about Manu and Rishi reuniting, keeping it open-ended," adds Chandel.

Recently, many filmmakers have shown there displeasure about the new drafts policy of the cinematograph act. On June 18, the Government sought responses from public regarding the draft amendment bill 2021 which propses to penalise film priacy with a jail term and fine, include age-based certification and empower the Central Government to recertify a film if there are complaints.

Chandel too believes it isn't fair. "I think it's not fair. CBFC is a governing body, so they should watch the work and give certfication acording to that. Yes, web series is a new medium. One can definitely have a governing body for that like CBFC. Then it's upto the audience if they want to watch it or not," Chandel asserts.

Chandel does believe people should unite and take a stand now. However he also agrees that people have different intentions of making movies. Complete unity is more of an utopian thought, but he feels the industry should speak to the government.  India News | 1984 Riots Victims Send Legal Notice to Makers of Web Series ‘Grahan’

Ranjan Chandel is currently developing a love story which will be a movie and not a webseries. Apart from that, he is talks with producers for making mini series on Lakshmi based on Rashid Maxwell book The Only Life: Osho, Laxmi and a Journey of the Heart.

(The above story first appeared on LatestLY on Jul 03, 2021 06:51 PM IST. For more news and updates on politics, world, sports, entertainment and lifestyle, log on to our website latestly.com).