With strong rumours of Charlie Cox making a cameo as Matt Murdock aka Daredevil in the upcoming Spider-Man: No Way Home, are we looking at MCU rebooting the Daredevil series? Can't say we are not excited at all! 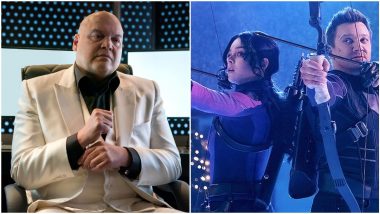 One of the best villains we have seen from anything related to Marvel happens to be Wilson Fisk aka Kingpin in the Netflix Daredevil series. Vincent D'Onofrio's fantastic performance as the vicious mob leader with intentions that he believes are good for his town was loved by fans and critics alike. So it was a tragedy that we were not to be getting more of his act when the Netflix series got cancelled (especially after that terrific third season). However, there were rumours that D'Onofrio might return, this time officially, to Marvel Cinematic Universe through the Disney+ series Hawkeye. Hawkeye Episode 3 Review: Alaqua Cox as Maya Lopez aka Echo Leaves a Mark in Jeremy Renner, Hailee Steinfeld's Marvel Series.

The actor himself had been hinting about it with some sly hints through his tweets. Now the third episode of Hawkeye also strongly hints his return into MCU. While the third episode doesn't exactly mention Kingpin, it introduces us to Maya Lopez aka Kingpin, played by Alaqua Cox. Hardcore Marvel fans know that the anti-hero, who later becomes Echo, has strong links to Wilson Fisk.

The episode strongly hints at their common connection. We see an offscreen man in a black tuxedo cradling little Maya's jaw in appreciation. An adult Maya refers to her boss a 'Uncle'. Clint refers to a leader on top of the organised mob pyramid, who he had crossed with earlier (as Ronin) and whom he claims to be someone dangerous. Aren't all these hints enough to get Marvel fans excited? Spider-Man No Way Home: New Leaked Stills of Tobey Maguire, Andrew Garfield’s Spider-Men and Charlie Cox’s Daredevil Leave Marvel Fans Confused if They Are Real or Fake!

We Also Know It!

I JUST KNOW THATS A KINGPIN TEASE, I KNOW IT pic.twitter.com/cTCwkf3SBy

THE BIG FISK REVEAL THIS SEASON IS GONNA BE SO INSANE… KINGPIN IS COMING BACK YOU GUYS pic.twitter.com/Ppaj29CXLQ

With strong rumours of Charlie Cox making a cameo as Matt Murdock aka Daredevil in the upcoming Spider-Man: No Way Home, are we looking at MCU rebooting the Daredevil series? Can't say we are not excited at all!

(The above story first appeared on LatestLY on Dec 01, 2021 04:34 PM IST. For more news and updates on politics, world, sports, entertainment and lifestyle, log on to our website latestly.com).