Hina Khan Opens Up About Her Acting Journey, Recalls Lying to Parents About Moving to Mumbai

Hina credits Bigg Boss for her grown popularity. She revealed that she had a 'no shorts, no steamy scenes’ policy but over time she decided to make her own rules. 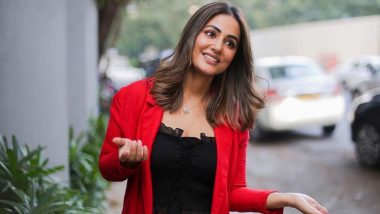 Hina Khan took the plunge and quit television to carve her niche in films. The actress was the popular face of Yeh Rishta Kya Kehlata Hia and did hit shows like Naagin as well. She moved her focus to movies and her debut film Lines premiered at Cannes 2019 as well. The actress also ventured into OTT shows and was a part of shows like Damaged. Hina sure has come a long way and thinking about her journey so far has only been an emotional roller coaster for her. Kasautii Zindagii Kay 2 Actress Hina Khan Looks Alluring in This Latest Selfie – View Pic.

Talking to the team of an Instagram paged called Official Humans Of Bombay, Hina sat down and reminiced about her journey and recalled what all hurdles she had to overcome to reach this point in her career. Talking about how she belonged to a conservative family, the Hacked actress told that her orthodox Kashmiri family considered acting a taboo. Even going to Delhi for college was a big task for her as she had to convince her father to let her go. It was then during college when her passion for acting took birth. "So, when a friend suggested auditioning for a serial, I said no. Upon insistence, I gave it a go & the casting directors loved me! The next day, I was selected for the lead role!

I moved to Bombay without telling my parents I was 20. The production people helped me find a place. It took me weeks to tell Papa. He was livid. Mom’s friends & relatives cut ties with us," revealed Hina.

She further revealed that her father only agreed to let her act if she promised to finish her studies. "I’d shoot all night, study in the breaks, then fly to Delhi to give my exams. The family stress was constantly looming–I told Mom to not bother, but it wasn’t easy. We’d argue a lot. But every year, my serial was the number 1 show I fell in love with the camera." Jennifer Winget, Nakuul Mehta, Hina Khan – Take a Look at the TV Newsmakers of the Week.

Hina credits Bigg Boss for her grown popularity. She revealed that she had a 'no shorts, no steamy scenes’ policy but over time she decided to make her own rules and did such scenes only after asking her parents if they were okay with it." And just when my parents had gotten used to me being an actor, I told them I was seeing Rocky. It came as a shock everybody in our family has had arranged marriages. But I gave them time & now, they love him more than me," added Hina.

She went on to talk about how she wanted to take risks at this point of her career and moved to movies and OTT platforms as well. "After, TV offers poured in, but I took a risk & quit TV to do movies. I was thrilled when I debuted at the Cannes film festival last year I felt so proud to represent India abroad. The way the entire film & TV industry came to my support, humbled me. "

Hina concluded, "It’s been 11 years since I first faced the camera–the little girl growing up in Srinagar would’ve never imagined walking Cannes. But a series of difficult choices have gotten me here. From Srinagar to Bombay, from being the first actor in my family to dating someone out of the community to giving up easy money at my peak, I’ve proudly carved my own way." Hina will now be seen in MX Player's Wishlist, a film she is also producing with beau Rocky.

(The above story first appeared on LatestLY on Dec 20, 2020 01:08 PM IST. For more news and updates on politics, world, sports, entertainment and lifestyle, log on to our website latestly.com).