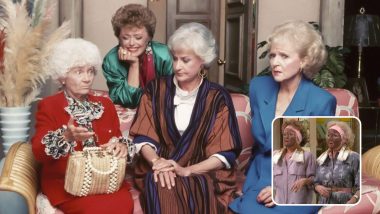 Streaming service Hulu has pulled an episode of the award-winning sitcom "The Golden Girls" for a blackface joke that features two of its lead actors Rue McClanahan and Betty White wearing mud masks. The NBC show, which ran for seven seasons from 1985 to 1992, followed four older women who share friendship and a home in Miami, Florida. It also starred Beatrice Arthur and Estelle Getty. Hulu dropped the episode titled "Mixed Blessings" from the third season of the series that shows Dorothy's (Arthur) son Michael (Scott Jacoby) introduce his betrothed Lorraine (Rosalind Cash), a much older black woman, to the family. Gone With The Wind Returns to HBO Max with a Disclaimer That Says It ‘Denies the Horrors of Slavery’

According to Entertainment Weekly, the controversial shot in the episode features Blanche (McClanahan) and Rose (White) wearing mud masks that confuses Lorraine's mom Greta (Virginia Capers), who isn't wearing her glasses, into thinking those were Michael's parents - who, until that moment, she believes is black. "The Golden Girls" is the latest series to have removed or edited an episode for its depiction of blackface, a type of makeup used by a non-black performer in an attempt to play a person of colour. Salma Hayek Signs First-look Deal With HBO Max

Other series include "The Office", "Scrubs", "30 Rock", "Community", "Little Britain". The development comes as media companies reappraise content in the wake of protests over police brutality and systemic racism after the death of George Floyd, an African American man killed by a white police officer in Minneapolis, Minnesota last month.