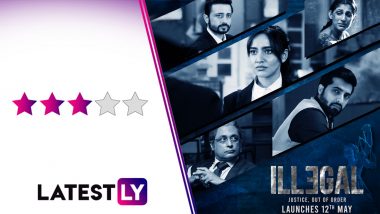 Illegal Review: Not sure what is it about legal dramas that makes us a fan of the genre. Be it the playing-to-the-galleries theatrics of Amitabh Bachchan's PINK or the heated buildup in Tom Cruise's A Few Good Men, there is something fascinating and thrilling about how the fate of a person or more is determined over legal banter, with some powerful statements made across both sides. It is this aspect that entices us to Voot Select's new series, Illegal, that is streaming on the platform from May 12. Fortunately, the show doesn't disappoint with its legal shenanigans, though some of its subplots and soap opera-sque relationship dramas do threaten to take the sting out of its best part. Illegal Trailer: Neha Sharma, Akshay Oberoi and Piyush Mishra's Fast-Paced Legal Drama Looks Binge-Worthy (Watch Video).

Niharika Singh (Neha Sharma, decent and confident) is a righteous budding lawyer from Bangalore. Raised by a single mother, Niharika doesn't hesitate to speak out the truth, be it for ousting a sexual predator or pointing out a prospective employer's wig gone wrong, even if it means loss of employment for her. It is this quality of hers that attracts her to Janardhan Jaitley aka JJ (Piyush Mishra), the head of a hotshot legal firm in Delhi, who offers her a placement in his team.

While Niharika sees this as a career enhancement, JJ has other motives in mind where he can utilise her adamancy to stand with the truth to his benefit. At the firm, Niharika also meets JJ's son Akshay (Akshay Oberoi), with whom she had a past, and who is now married to another woman.

Niharika is interested in using her resources to save a death row inmate Maher (Kubbra Sait), who has been languishing in jail for 15 years for voluntary manslaughter. JJ encourages her, seeing this opportunity to further his political ambitions.

Meanwhile, Akshay's friend, who is also the arrogant son of a hotel tycoon (Deepak Tijori), is accused by his employee of raping her. Hesitant at first, despite Akshay's insistence that his friend is innocent, Niharika is coaxed by circumstances to take up the case.

Little did she know though, that the very two cases that would define where her career would be heading would also make her face her own ethics and values. At one point, Niharika points out that even though everyone is privileged to get justice, it is only available for the privilege. Which is exactly she aims to fight against, even though she mostly ends up doing the exact opposite.

What I like about Voot Select's shows I have watched (till now, that is) - be it Asur or The Raikar Case - is that, while the handling is pretty okayish, the writing is good, especially the character turns. Illegal is no different. While I wish the execution could have been more polished, the drama that unfolds over the span of 10 episodes holds onto your attention thanks to some gripping moments. The Raikar Case Review: Voot Select’s Murder-Mystery Series Has Good Suspense but Struggles to Contain Its Own Skeletons.

Watch the Trailer of Illegal here:

The show is kind of a coming of age saga for its protagonist, as she works her way through both her professional and personal upheavals to stand for justice. As expected, the professional turnarounds in Niharika's life are more thrilling than her personal stories. The fun part about Illegal, directed by Sahir Raza (with Vikram Bhatt involved in a creative capacity) is that it works as both a legal drama and a mystery thriller. Along with Niharika, we are to find if the accused has committed the crime, or if the employees is just taking her vengeance. The battle of wits between her and the prosecuting lawyer Puneet (Satyadeep Mishra), a former JJ protege who is haunted by his own demons, in the court has its moments. While the #MeToo aspects of the case can't be ignored, Illegal is more focussed on the corruption of the moral ethics when it comes to the justice system.

Even more interesting is any scene involving JJ and his conniving schemes to push his interests any means how, even it warrants putting down his own family. The most intriguing character of the show, hands down, JJ makes for one of the most interesting, even dangerous antagonists in recent shows - someone who is far more brilliant than the heroes, and willing to go to any lengths to keep his plays hidden. He is the show's equivalent of Tywin Lannister, except his nemesis isn't a step-son, but a protege.

But beyond JJ's karnamas, Illegal struggles with the fillers, especially the romantic dilemma that sprouts between Niharika and Akshay, or her personal connection with the rape accused. It would have been less annoying if the subplots didn't come at the cost of spending less time with the Maher plotline, which could have been such a wonderful thread that deserves more exploration. First of all, Kubbra Sait gives the best performance of the series in the role, especially in the final two episodes, so I really wanted to see more of her. Also, the legal matter of how women are never really hanged, even after being sentenced death lends for an interesting debate. Hope this is discussed more in the second season. Asur Season 1 Review: Arshad Warsi, Barun Sobti’s Thriller Series Succeeds in Keeping the Mystery Alive and Binge-Worthy.

PS: Why does the theme music remind me of the TV series, The Flash?

- Some of the Relationship Drama

Illegal makes for a binge-worthy watch, with some very compelling legal drama, interesting characters and a couple of really good performances. Also, compared to both Asur and The Raikar Case, it has a slightly cheery and fulfilling conclusion with enough cliffhangers left for another season.

(The above story first appeared on LatestLY on May 12, 2020 01:30 PM IST. For more news and updates on politics, world, sports, entertainment and lifestyle, log on to our website latestly.com).