The Raikar Case Review: Voot Select’s Murder-Mystery Series Has Good Suspense but Struggles to Contain Its Own Skeletons 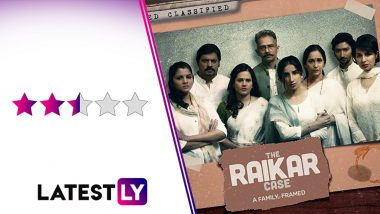 The Raikar Case Review: The influential Naik Raikar family in Goa is in mourning. One of their kin, Tarun (Honey Kamboj), has apparently committed suicide by jumping off a cliff for reasons unknown. His uncle and the family patriarch, Vinayak (Atul Kulkarni)'s political career is clouded by the death. The matriarch Sakshi (Ashwini Bhave) is trying to hold her extended family together, while their daughter Itasha (Parul Gulati) feels responsible for the suicide because she didn't take Tarun's calls before his demise. The Raikar Case Trailer: This Atul Kulkarni, Neil Bhoopalam Starrer Series Promises to be an Intriguing Whodunnit With a Family Twist (Watch Video).

The police under the team of John Perreira (Neil Bhoopalam) is investigating the case and John realises that Tarun's death isn't suicide; it's a cold-blooded murder. And everyone in the Naik Raikar family come under the eye of suspicion. As the investigation progresses, it unravels the deep-dark secrets of every member of the Raikar family, as each seems to have some connection to Tarun's murder.

The seven-episode first season of The Raikar Case has dropped on the recently launched OTT platform, Voot Select. While Voot already has grabbed attention with their series, Asur, The Raikar Case is a right move in the platform's attempt to get the attention of viewers who love thriller series. Even if they are plenty of missteps in the process. Asur Season 1 Review: Arshad Warsi, Barun Sobti’s Thriller Series Succeeds in Keeping the Mystery Alive and Binge-Worthy.

The first couple of episodes of the series are pretty underwhelming, more so for its kitschy treatment and the rather bland performances from a couple of key actors. However, as the show progresses and the mystery builds up, The Raikar Case turns out to be a fairly engrossing show. Especially in the final three episodes of the series that ends with a pretty shocking twist (even if it leaves you hanging with some very anguished questions). The writing shows a marked improvement and there are some good twists and turns that keep the suspense alive. But the improvements aren't enough to mask some major weak spots.

Like, for example, the whole police investigation angle is The Raikar Case's Achilles Heel. Which is unfortunate, since the police officer is a key character in the show and considering it's a murder mystery, this track should have been better handled. Instead, we are served with plenty of loopholes that showcase the inept handling by the department, from a post-mortem doctor ignoring a visible injury on the forehead of a corpse to people getting kidnapped right under the cops' noses. Even Asur took a similar direction but that was because the antagonist was smarter than the brilliant heroes. Here, the police are plain inept, made even worse by Bhoopalam's unconvincing portrayal of Perreira.

Watch the Trailer of The Raikar Case here:

Instead, the show gets a better scope when the mystery is shown through Itasha's eyes. As she pokes around dealing with her cousin's death, she stumbles up some dirty skeletons in each of her family's closet (each episode shifts focus from one family member to the next), making her realise how, in the words of her brother Mohit (Kunal Karan Kapoor), their family is F**ked Up!

But even in this case, it is the skeletons that turn out to be far more fascinating than the one discovering them. Itasha barely gets to be more than a wide-eyed protagonist, who just comes across secrets because they are placed in front of her. Moreover, she is shoehorned with Perreira into the most badly-forced romantic track I have seen in any show in recent times that has no place in the series, save for serving a listless love-making sequence.

Thankfully, some of these weak spots do get overshadowed in the latter part of the season. Even the performances get better, with the most-noteworthy being Ashwini Bhave (powerful) and Lalit Prabhakar (convincingly abhorrent) as the hot-headed son of Vinayak's foul-mouthed political associate. The scenes involving these two characters pretty much add chutzpah to the show. Atul Kulkarni is kept strangely restrained, though his emotional act in the finale reflects the actor's terrific calibre.

- Writing Gets Better in the Second Half

- Underwhelming in Many Portions

- Some of The Actors Are Jarring

If you are in the mood for some good suspense, then Voot Select's The Raikar Case does have potential to keep you engrossed. However, without a credible Byomkesh Bakshi to guide it through, the show threatens to fall apart, only to be held by some decent writing in second half and Ashwini Bhave's splendid performance.

(The above story first appeared on LatestLY on Apr 10, 2020 05:08 PM IST. For more news and updates on politics, world, sports, entertainment and lifestyle, log on to our website latestly.com).