It's Official! Abhishek Bachchan Confirms Breathe 3, Says He Will Start Shooting in May for the Thriller Series

If you happen to be a fan of the Breathe series, then we are sure that this update about it will make you excited. As after Abhishek Bachchan Breathe: Into The Shadows, the third part of the popular web-series is already on the cards. Read on. 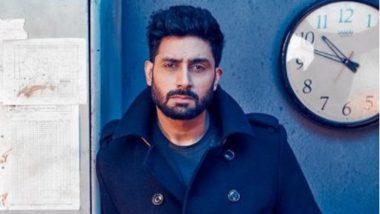 If you happen to be a fan of Amazon Prime's Breathe series, then we are sure that this update about it will make you excited. As after Abhishek Bachchan Breathe: Into The Shadows, the third part of the popular web-series is already on the cards. And well, it's Junior Bachchan himself who has confirmed this news.  In fact, he also revealed about his reunion with John Abraham after 13 long years. In conservation with Pinkvilla, the actor made it official about Breath 3. Breathe Into the Shadows Ending Explained: Here’s What Happens to Abhishek Bachchan, Amit Sadh, Nithya Menen’s Characters and the Meaning of C-16 (SPOILER ALERT).

According to an interview, Abhishek Bachchan mentioned he is soon to team up with John Abraham and said, “Last month, I started shooting for Dasvi in Agra, which will be completed by the end of April. I finish that, and immediately I start shooting for the next season of Breathe. And as soon as I finish that, I get back to my jigri, to make my film with John, will which will be a reunion after 13 years.”Amit Sadh, Abhishek Bachchan's Breathe Into the Shadows Co-star Confirms Testing Negative for COVID-19.

With this, the cat's finally out of the bag that Breathe season 3 is happening very soon, and Abhishek is also the part of it. FYI, the first part of the show had R Madhavan, Amit Sadh and Sapna Pabbi playing key roles whereas the second season saw Abhishek Bachchan, Amit Sadh and Nithya Menen. Now, it will be interesting to see if the new season brings new faces or not. Stay tuned!

(The above story first appeared on LatestLY on Mar 27, 2021 07:24 PM IST. For more news and updates on politics, world, sports, entertainment and lifestyle, log on to our website latestly.com).