Jennifer Winget Birthday Special: 6 Stunning Instagram Pictures of the Diva We Can’t Get Over 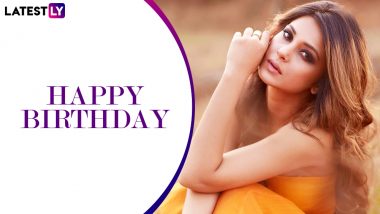 Television diva Jennifer Winget, who is one of the most talented and sought-after actresses in the TV industry, turns 34 today (May 30) and birthday wishes have been pouring in for the actress from her fans and colleagues on social media. The actress, who charmed us with her character Maya Mehrotra (where she played an obsessed, psychotic character) in Sony Entertainment’s much-celebrated show Beyhadh, won over her fans once again with Bepannaah as Zoya. There is no denying that Jennifer is currently ruling the roost on telly land. Her roles have not only won a lot of hearts, but has also created a niche for herself in the industry. Jennifer Winget Begins Shooting for ALT Balaji’s Code M (View Pic)

Jenny, who has a massive fan following on the photo-sharing app, is quite active on social media. She is often seen sharing pictures from her vacation or photo shoot or from the sets. Scrolling through Jenny’s social media timeline, a few pictures of the actress struck a chord with us and all Jennifer fans. So, on the actress’ 34th birthday, let’s take a look at 6 most stunning pictures of Jenny. Bepannaah Star Jennifer Winget Is Hotness Personified in These Recent Clicks

When it comes to footwear; I'm guilty, I have a fetish and with @skechersindia , I am spoilt for choice. Crushing over your new CALI range that feels comfy and looks stylish with any outfit. Each one, pick one #SkechersCali

With her beauty, oomph and charisma, Jennifer has wooed the her audience time and again.

I am what I am because of the strength, love and positivity I can channel from all the various super women that surround me – my mum, my girlfriends, my co-stars, my doctors, teachers, trainers and Gosh, even, my core team. Power-women warriors and so proud! So here’s taking the opportunity to wish all the lovely ladies out there, an inspiring and empowering Women’s Day. … And so to celebrate and ensure you put your best foot forward, @Skechersindia and I have put together a special contest. 2 lucky winners get the chance to strut in style with @skechersindia shoes. Oh! you don’t have to do much 😉, Just… 1. Follow @skechersindia 2. Then in the comment section below tag the women who’ve helped/encouraged you to step it up in life 3. Go to the @skechersindia page and type “DONE” on their latest post featuring your’s truly, ME! 😊 4. The winners will be announced on the @skechersindia page the following Friday, The 15th of March 2019. 5. While multiple entries are allowed, sadly this contest is applicable only to India. #IWD2019 #SkechersVibe

Jennifer has managed to remain one of the most sought-after TV actresses in a career spanning at least seventeen years.

You *walked* into my life and made me realise why it never worked out with anyone else 😉 Everyone, this is what love looks like @skechersindia Singletons, put your best foot forward this Valentine’s (and everyday before and after!) 🥰

On the career front, Jennifer, who was last seen in Harshad Chopda starrer Bepannaah, is now making her digital debut with ALT Balaji's Code M.

Shape-Shifting - My own cover girl!

Reports also suggest that Jennifer and Kushal Tandon's popular drama Beyhadh, that went off air in 2017, is returning with another season and is all set to go on floors and will premiere by April. Apparently, Jennifer, who wowed us with her brilliant performance in season 1, will be part of the show, but Kushal is in no mood to do the show! However, nothing has been officially confirmed by the makers yet.

(The above story first appeared on LatestLY on May 30, 2019 08:00 AM IST. For more news and updates on politics, world, sports, entertainment and lifestyle, log on to our website latestly.com).