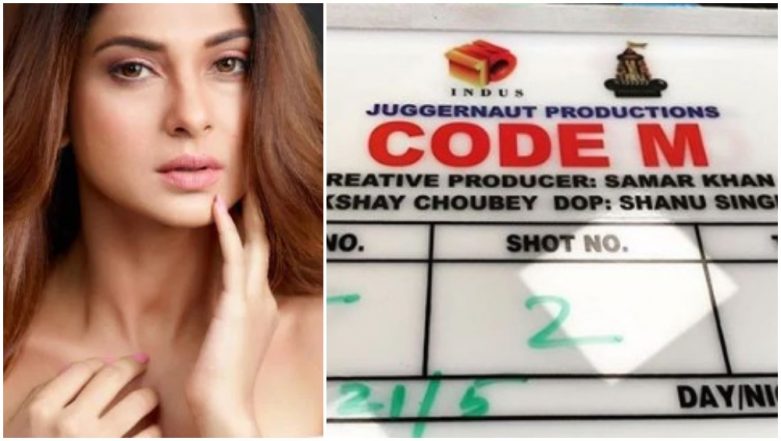 One of the most beautiful faces in the television industry, Jennifer Winget, has been ruling the roost with her splendid acting chops and charisma for a really long time now. The actress has managed to remain one of the most sought-after TV actresses in a career spanning at least seventeen years. Jennifer, who was last seen in Harshad Chopda starrer Bepannaah, is now making her digital debut with ALT Balaji's Code M. The actress, who never shies away from experimenting with different storylines and roles, is all set to take on a completely new avatar in the web series and we can't wait to see Jenny once again playing a brand new character. Bepannaah Star Jennifer Winget Is Hotness Personified in These Recent Clicks

Jennifer will be seen playing the role of an army officer named Monica. Talking about her character, the actress told Pinkvilla, "The character I play is called Monica. Honestly, I am very excited but I am equally anxious because to train and ready myself to be an army officer, which is something I have never done. It is an interesting and new space for me because wearing a uniform comes with a lot of responsibility and respect and getting that right and to keep working on the personality of your character, get the body language right and the way we speak to get that on point is paramount." Jennifer Winget Dives Straight to the Gym to Shed All the Extra Vacay Kilos – View Pics

Recently, the makers took to the photo-sharing app to announce that the team has now kick-started the shoot for Code M and also shared a picture of the clapboard with Code M written on it, while they captioned it as, "#newshow #altbalaji #shootmode with @samkhan @jenniferwinget1 @tanujvirwani @crazysoberberry @akshayindahouse @ektaravikapoor #jaimatadi"

Speaking of Jennifer reuniting with Ekta Kapoor and the Balaji Camp after Kasautii Zindagii Kay 2, Jenny had told the portal, "It is amazing to be back to Balaji! Kasautii gave me such a wider recognition and I was with Balaji for a very very long time. Now, I am working with them again after a long time. I am so looking forward to it. Ekta has been amazing. I have always been very fond of her. I met her recently before going on my holiday and told her the kind of work I would like to do and this is what she offered me and I couldn’t have been more grateful." Jennifer Winget Signs Alt Balaji’s Code M; To Commence Shooting from May 21!

In other news, it is being said that Jennifer and Kushal Tandon's popular drama Beyhadh, that went off air in 2017, is all set to go on floors and will premiere by April. Apparently, Jennifer, who wowed us with her brilliant performance in season 1, will be part of the show, but Kushal is in no mood to do the show! However, nothing has been officially confirmed about the second installment of Beyhadh series by the makers yet. But at a recent awards ceremony, Jennifer was asked about the show's return with the second season, the actress didn't deny it but asked to wait for it patiently.