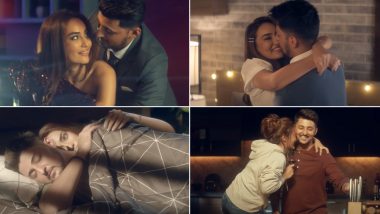 Actress Surbhi Chandna seems to have now become a fan of starring in music videos. After her music video with Ali Fazal, the actress is back with another one starring Darshan Raval where both of them play undercover agenst who are separated and debriefed, which breaks their heats. While Surbhi is shown to have some hidden agenda, Darshan discovers her secret ploy and informs his superiors. He is offered a choice - to go to jail himself and save Jyoti which he picks and sacrifices. Gul Khan Recalls Screaming at her Qubool Hai Pair Surbhi Jyoti and Karan Singh Grover During Their First Scene Together (Details Inside).

The song's description on YouTube also reads, "Separation is like a double-edged sword. It not only breaks your heart but also creates a void that no other person can substitute. Judaiyaan is an emotionally charged song by Darshan Raval & Shreya Ghoshal that will make you explore the world of love and separation." Sidharth Shukla and Shehnaaz Gill's Bhula Dunga Music Video With Darshan Raval Crosses Over 30 Million Views.

Judaiyaan has been crooned by Darshan Raval and Shreya Ghoshal. Composed by Darshan, the song has been penned by Rashmi Virag and the music video has been directed by Rishka Bajaj and produced by Gaurav Chawla. What is your opinion about the song?

(The above story first appeared on LatestLY on Oct 18, 2020 02:44 PM IST. For more news and updates on politics, world, sports, entertainment and lifestyle, log on to our website latestly.com).