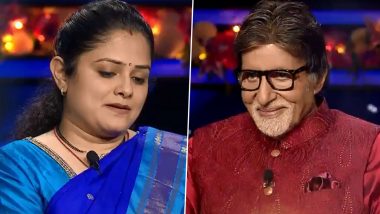 Kaun Banega Crorepati 12 gets its second crorepati of the season and it's none other than Mohita Sharma. Interestingly, the episode of the big winner arrives within a week of Nazia Nasim being crowned as the first crorepati of the season. Our new crorepati Mohita Sharma is actually an IPS officer who serves as an Assistant Superintendent of Police in Jammu & Kashmir. She won the fastest finger first in yesterday's episode and now she has comfortably crossed the ninth question mark of Rs 1,60,000 with a loss of a lifeline (Video-A-Friend). What we see in the episode is a confident lady answering every question with a calm and composed mind and its inspiring to watch ladies rocking Amitabh Bachchan's quiz show this season. Kaun Banega Crorepati 12: Find Out the Questions That Made Nazia Nasim Become the First Crorepati of the Season in Amitabh Bachchan’s Quiz Show!

In a promo, we saw Mohita say "Chahe jo marzi dhanrashi jeet ke jau, par raat ko jab so-un, to ye lage ki badhiya khel ke gayi" and yes she did play the game with determination and focus. The 30-year old is married to Rushal Garg, who works as an Indian Forest Service officer. Mohita reveals that her husband is trying to participate Amitabh Bachchan's game show for 20 years now but failed to make it even to the hot seat. Earlier, we posted you with the list of questions asked to the first crorepati Nazia Nasim and now we present you with the questions hurled at IPS Mohita Sharma. Below is the list of questions asked to the second crorepati of KBC 12. Kaun Banega Crorepati 12: Nazia Nasim Wins Rs 1 Crore, Becomes the First Crorepati of the Season on Amitabh Bachchan Hosted Reality Game Show (Watch Video)

1st Question - (Rs 1,000) What word when added to the movie title 'Shubh Mangal Saavdhan' gives the title of another Hindi movie?

2nd Question - (Rs 2,000) - In which of these social media platform you can like the post or a message on double tap?

3rd Question - (Rs 3,000) -The popular Snack Momo is an example of which culture's cuisine?

6th Question - (Rs 20,000) - What are the names of the two blocks of the Secretariat Building on either side of the Rajpath in New Delhi known as?

9th Question - (Rs 1,60,000) - Which of these rulers' reign did Amir Khusro not witness during his lifetime? (Mohita used Video-A-Friend Lifeline)

11th Question (Rs 6,40,000) - Which of these acronyms stands for a specialised unit of the Central Reserve Police Force?

12th Question (Rs 12,50,000) - Which fundamental right did Dr Bhimrao Ambedkar call the 'Soul and heart of the Constitution'?

14th Question (50,00,000) - Due to the annual migration of one million Amur Falcons in this region, which of the following has earned the nickname of the 'Falcon Capital of the World'?

16th Question (Rs 7 Crore Question) - Launched in 1817 which of these ships built by the Wadia Group in Bombay is the oldest British warship still afloat?

The best attribute of today's contestant IPS Mohita Sharma was she gave answers to the toughest questions so quickly and just 20 minutes to today's episode we reached straightaway to Rs 1 crore question from Rs 3.20 lakhs question in no time. Mohita also revealed that her husband helped her revise the origination of rivers that helped her give the right answer to the 3.2 lakh question. Just like the first crorepati of the season Nazia Nasim, Mohita Sharma too quit the Rs 7 crore question. LatestLY and team congratulate the IPS officer for her grand win.

(The above story first appeared on LatestLY on Nov 17, 2020 10:01 PM IST. For more news and updates on politics, world, sports, entertainment and lifestyle, log on to our website latestly.com).