Actors Mohit Malik and Addite Malik, are all set to welcome their first child. The actors, who have been married for a decade now, are all set for parenthood and baby Malik is due in May 2021. 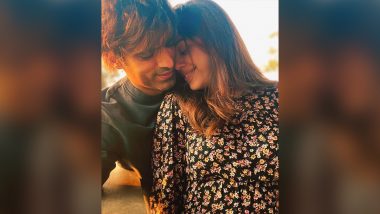 Like we said yesterday too, for many, looks like 2021 will be a year of hope for many. Including actors Mohit Malik and Addite Malik, who are all set to welcome their first child. The actors, who have been married for a decade now, are all set for parenthood and baby Malik is due in May 2021. "I was in the midst of a shoot when Addite called to give me the good news. All she said was, ‘The tests are positive.’ For a minute, I panicked and assumed she was talking about testing positive for COVID-19! But she laughed and told me that she was pregnant and that we are going to become parents. It took two days for the news to sink in. I kept asking her to check again and again,” said an excited Mohit, while confirming the news to BT. Happy Father's Day 2019: Kullfi Kumar Baajewala Actor Mohit Malik Dedicates This Day To His Character Sikander Singh Gill From The Show.

Speaking to the daily, Addite revealed, "I have my restaurant business to take care of, but for the time being, all operations will be done from home. Both Mohit and I are taking extra precautions due to the pandemic and we maintain social distancing as much as possible. We avoid meeting friends, who have only recently started meeting each other. My father, who was unwell for the past few months and is recovering now, is most excited to become a grandpa!” EXCLUSIVE: Mohit Malik on Lockdown Ki Lovestory - 'My Character Dhruv Is Going To Be More Of A Personal Journey For Me While Portraying Him'.

While Mohit has played the doting dad on-screen recently in Kullfi Kumarr Bajewala and was loved for his portrayal of father, he is excited to play that role IRL for a lifetime now. He also got emotional and revealed how his parents have wanted to become grandparents for a long while now. He also went on to state how he and Addite are working upon themselves as well, to become better parents. Karanvir Bohra and Teejay Sidhu Welcome Baby Girl, Actor Says Twins Bella and Vienna Are Excited To Welcome Their Sister Home (Watch Video).

He said, “Both Addite and I are also trying to become better individuals and feel we should keep no room for negativity in our lives because a child emulates the parents. We are looking forward to this new chapter in our lives and want to give our best to it.”

"My parents have been waiting for so long to become grandparents. When I gave them the good news, I kept asking them, ‘Are you both happy now?’ When I played a father, Sikandar, in my show Kullfi Kumarr Bajewala, I had to lean on my imagination to enact the role of a father. But now, the paternal feeling will come naturally to me. I was so happy playing a father to two daughters in the TV show, so I will be over the moon if we get a daughter,” he concluded.

(The above story first appeared on LatestLY on Dec 22, 2020 08:25 AM IST. For more news and updates on politics, world, sports, entertainment and lifestyle, log on to our website latestly.com).