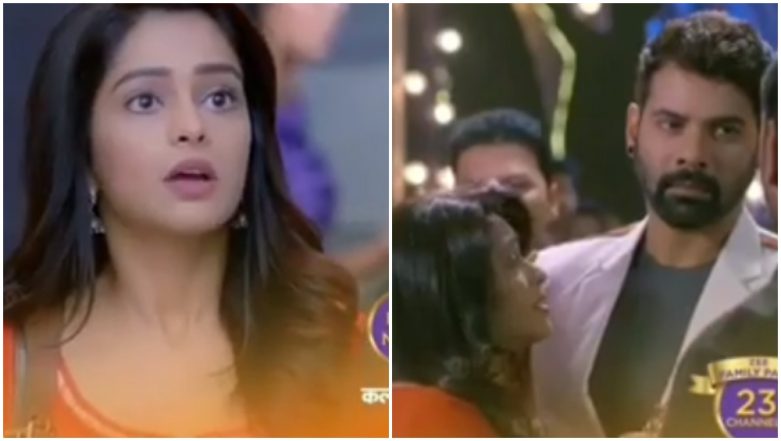 Today’s episode of Kumkum Bhagya starts with Bijee pacifying Pragya (Sriti Jha) to let Prachi (Mugdha Chaphekar) go to Delhi for her scholarship without keeping the impact of her past in mind. But Pragya looks very tensed. She takes a bag and starts packing for Prachi. Bijee is happy with Pragya’s decision. Abhi (Shabir Ahluwalia) discusses a newcomer with Aaliya, Dadi comes there. She taunts him for rejecting the newcomer singer but Abhi says that he opened the company to promote his talent. Aaliya gets a message that Abhi will be getting an award. All become very happy to know that. Bijee also congratulates Abhi. Abhi expresses his gratitude to his best friend Vikram as he is a partner in the company. Rhea comes there congratulating her father. Abhi says that he is living because of his daughter Rhea. Kumkum Bhagya March 18, 2019 Written Update Full Episode: After 20 Years Abhi and Pragya’s Twin Daughters, Riya and Prachi, to Battle It Out

Prachi and her cousin come to the bus station as they are going to Delhi for further education. Her cousin is very excited but she notices that Prachi is upset. Prachi shares that she is going away from her mother after a long time so she is feeling upset. She remembers how Pragya cared for each and everything for her. Pragya is worried about Prachi as she is going to out of the station after a long time. Bijee asks her not to worry much as Prachi has grown up. Finally, Prachi and her cousin reach Delhi. Prachi recollects that Abhi is her father who stays in Delhi and because of him Pragya had to leave Delhi. Her cousin gets the address of her uncle but it flew with the wind. They run behind it. Kumkum Bhagya Leap: Not Kirtida Mistry But Mugdha Chaphekar Bags The Shabbir Ahluwalia-Sriti Jha Starrer!

Abhi has a conversation with Rhea and he insists her to attend his award function. Rhea agrees to that. While Prachi looks for the paper of address, it flies on the road. Prachi tries to catch it but she comes in front of Abhi’s car. Abhi somehow manages to turn the staring and safeguards her. Prachi and her cousin get very scared about the incident. Pragya gets some intuition of something wrong happening with Prachi. So she gets tensed. Bijee consoles her. But Pragya feels that Prachi must be safe. She tries calling Prachi but her mobile is switched off and she gets even tenser. Abhi comes out to talk to Prachi.

He scolds her for coming in front of his car. While Rhea is on the call, he sees Prachi. They look at each other and smile. Later Abhi asks her to think about her parents before doing anything wrong. Later he leaves from there. Prachi apologizes to him and also expresses her gratitude for saving her life. But her cousin is upset with the way Abhi scolded her as if he is her father. Prachi gets angry as she hates her father. Abhi shares the incidence with Rhea. Prachi and her cousin lose the paper of address. They come to get their bags, but they see someone stealing their bags.