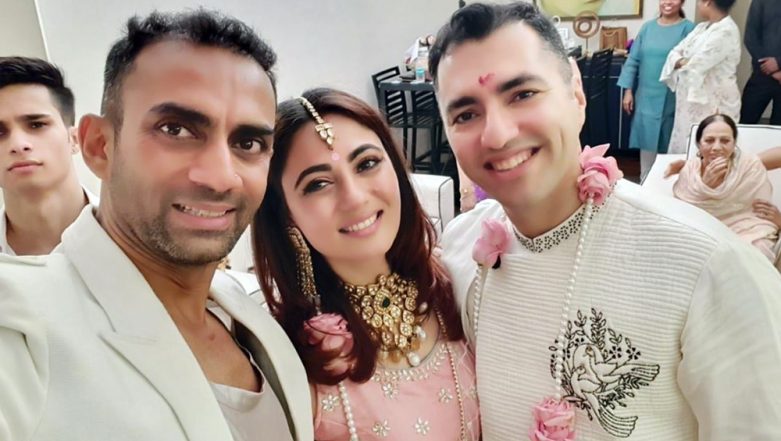 Actress Pooja Ghai, who became a household name with her stint as Suhasi in Kyunki Saas Bhi Kabhi Bahu Thi, recently tied the knot the second time on July 9, 2019 with her longtime boyfriend and partner Nowshir Engineer. In an adorable picture that she shared on her social media, Pooja tagged her mother, brother, son and husband and wrote, “My pillars of strength, all in one frame..! My Mommy, My Cookie, My Brother, My Didi & My Nowshoo.” Pooja was earlier married to Niraj Rawal and the duo have a son Raaj. 18 Years of Kyunki Saas Bhi Kabhi Bahu Thi: Ekta Kapoor and Smriti Irani Get Emotional, Share Throwback Pictures on Instagram

Check out Pooja’s announcement below:

my pillars of strength, all in one frame..! My Mommy, My Cookie, My Brother, My Didi & My Nowshoo ❤️

Pooja looked the perfect glowy bride in a pink lehenga, while her groom was dressed in a cream-colored sherwani and needless to say, the couple looked their happiest best. And guess what the best part of Pooja’s marriage was- her 18-year-old son Raaj was in attendance at the do.

Pooja was earlier married to Neeraj Rawal but the duo parted ways in 2007. Later, it was rumoured that Pooja and Vikas Kalantari were dating each other, but the latter’s reluctance to settle down led to their break up. Soon after, Pooja and Neeraj patched up and tied the knot again in 2010, but unfortunately, their second innings did not last. Well, letting the past go, we congratulate Pooja and Nowshir on their marriage.