Lock Upp will see contestants facing challenges to survive in extreme conditions where they will have to win tasks to achieve basic necessities. Here, what all Tehseen Poonawalla told us before entering the Kangana Ranaut hosted reality show. Read on! 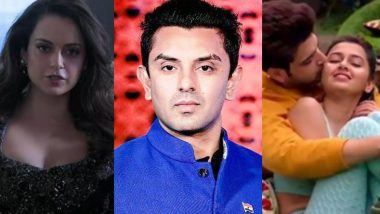 Ekta Kapoor's new reality show on ALT Balaji/MX Player titled Lock Upp is making quite a noise. Hosted by none other than the queen of Bollywood, Kangana Ranaut, the show that premiered on February 27 sees sixteen controversial celebs getting 'jailed'. While the concept of this one is extremely new, fans have been eager to see all the contestants of the show. Among the many, former Bigg Boss contestant and political analyst, Tehseen Poonawalla is also a participant on Lock Upp. Lock Upp: From Poonam Pandey, Babita Phogat to Payal Rohatgi – Here’s the Confirmed List of Contestants to Be ‘Jailed’ on Kangana Ranaut’s Show!

And so, before entering the show, we at LatestLY had a conversation with Tehseen about Lock Upp, Kangana Ranaut, Tejasswi Prakash-Karan Kundrra's cheimistry and more. Read what all he said to below.

There was a lot of buzz that you are part of Lock Upp? How excited are you for the show?

It’s always good to be part of any buzz especially something as revolutionary as a metaverse game show, slash, a reality show on an on OTT platform. Even I'm very excited and looking forward to be the part of the unique as well as challenging game show.

How will you deal with host Kangana and her ideologies on the show?

Well, Kangana and me definitely share very different ideologies in the political space. However, I think she is phenomenal actress who speaks her mind with conviction and that’s something I admire about her and  can relate to. As am equally dedicated to my ideology/ point of view and speak my mind fearlessly. So, I think Ranaut will be a worthy jailer and an adversary.

What are your thoughts on the other contestants in Lock Upp?

I think there are 16 contestants on the show and my opinion about each one of them will form as the show progresses and how the audience connects with them. Let’s see how the sixteen evolve on the show. OnlyFans Star Poonam Pandey Named Third Contestant of Kangana Ranaut-Hosted Lock Upp Reality Show, Watch Bold Model Strip in Promo Video!

As you were part of Bigg Boss, what are you views on TejRan as a couple?

They both are young, talented and seem to be extremely in love and moreover they look fantastic on the screen. Hashtag TejRan has been trending across social media for a long time now and honestly I want to wish them all the very best together.

Any projects we will see you in future?

I’m in talks with a few OTT platforms and have couple of OTT projects in hand, but these are non fiction, so I’m keen and looking forward to it.

(The above story first appeared on LatestLY on Feb 28, 2022 05:55 PM IST. For more news and updates on politics, world, sports, entertainment and lifestyle, log on to our website latestly.com).