He said, "Hyderabad police are reaching Mumbai for further investigation today, May 6. The finale has been preponed keeping in light these developments to May 7 from May 9." 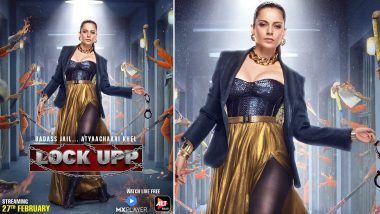 Television czarina Ektaa R Kapoor has landed in trouble just as her show 'Lock Upp' is heading towards its finale as the Hyderabad Police has registered an FIR against ALTBalaji, MX Player and Endemol Shine for alleged plagiarism. As per the reports Hyderabad Police have begun their inquiry. Hyderabad-based Sanober Baig, managing director of Prime Media filed a complaint in the Supreme Court demanding the show be stopped and was directed to approach the lower court. Lock Upp: Supreme Court Refuses to Stop Streaming of Ekta Kapoor’s Reality Show Over Copyright Infringement Issue.

Later, the city civil court ordered to stop airing of the show from April 29. He had been fighting a legal battle with the makers of the show as he alleged plagiarism against them for copying his concept of 'Jail'. Recently, he said that it is shocking for him that the show is still going on. "Shocked that the airing of the show has not stopped, I had to knock on the doors of the police. The Hyderabad Police after understanding and verifying the situation in detail have registered an FIR in the matter under sections 420, 406 and 469 of the IPC. The FIR dated 4th May 2022 at Kanchanbagh Police Station of Hyderabad and bearing the number 86/22 mentions the details."

In February, he had accused the show producer Abhishek Rege of stealing his idea. He added: "I am aware that Ekta Kapoor has multiple FIRs against her for objectionable content and indecent representation of the families of the Indian Armed Forces and am appalled that the law is being misused by her and her organization brazenly. We have heard the police and the judges bemoan the fact that the rich and the powerful get in the way of the proceedings of the law. I believe the bigger a person is, the more responsibility they have to maintain the law and order."

"There cannot be two sets of laws -- one for the powerful and one for the ordinary citizens. As we celebrate the 75 years of democratic governance in India, the trust of ordinary citizens in institutions such as the police and judiciary should not be broken. I am sure that due to our persistent efforts; eventually, there will be a fair trial and prosecution of the accused - who are seated in powerful chairs," he said. Lock Upp: Ekta Kapoor Reveals Her Five Fave Contestants, Tells Munawar Faruqui to Improve His Game (Watch Video).

He said, "Hyderabad police are reaching Mumbai for further investigation today, May 6. The finale has been preponed keeping in light these developments to May 7 from May 9."

(The above story first appeared on LatestLY on May 06, 2022 12:32 PM IST. For more news and updates on politics, world, sports, entertainment and lifestyle, log on to our website latestly.com).