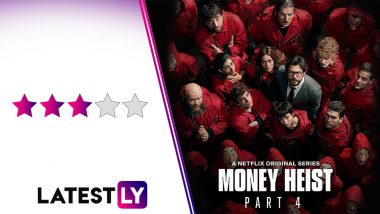 Money Heist Season 4 Review: The last time we saw them at the end of season 3 of Netflix's Spanish thriller series Money Heist, the Professor (Álvaro Morte) and his team were in a big mess. The Professor, who is on the run and even gets into a fracas with a mad bull, thinks his love, Raquel (Itziar Ituño), is executed and so does the rest of the team, who are still holed up in the Bank of Spain. Nairobi (Alba Flores) is grievously injured getting shot by a police bullet, and the others try desperately to save her. Tokyo (Úrsula Corberó) becomes the leader of the faction inside, while Palermo (Rodrigo de la Serna) acts crazy. Money Heist 4: Twitterati Say Álex Pina’s Crime Drama on Netflix Exceeds Expectations!

Meanwhile Alicia (Najwa Nimri), the National Police Corps officer, is manipulating a captured Raquel to betray her team. Things heat up in the bank further. Denver (Jaime Lorente) thinks Stockholm (Esther Acebo) is having a fling with Rio (Miguel Herrán), and is miserable about it. Gandia (José Manuel Poga), the head of security of the banks, escapes from his bindings and is creating havoc to the team. Can the Professor and Tokyo manage to get their gang out of the mess along with the money? The rest of the series have questions to that and a lot more.

What makes Money Heist season 4 a very peculiar watch is how the showrunners make the already binge-worthy series an exciting edge by shaking things up in terms of complacency. In the past seasons, the Professor has a plan, and now in season four, he has shattered bits of a plan. To see him and his team improvise as they go about trying to make their way out of the bank alive gives the show an interesting turn. The season spices up as it shifts from the predicaments of the Professor (who's joined by Marseille), to Raquel to the heist team, amping up the thrill and suspense whenever needed. Money Heist 4 Just Dropped on Netflix and Internet Is Going Crazy!

Those who like some red sauce would also find the new season bloodier and gorier than the previous ones. Like there is a stabbing with a fork that you cannot just take off your memory any time soon. But at times, the bloody scenes feel unnecessary too. For which again, I like to quote the example of the aforementioned fork scene, which doesn't add much to the story.

While the shifting narratives is a trope that we have seen in the past with the show, in the fourth season, however, Money Heist does get affected in terms of pacing and, plot-wise, urgency. The whole Denver-Stockholm-Rio entanglement may have its moments, like making the viewers get a closer insight to Rio's trauma post his period as a prisoner. But the drama that ensues just feels like fillers in the season. Also Gandia isn't a very developed or an impactful antagonist as Berlin had been, which is also the case with another of season's baddies.

Apart from these flaws, though, Money Heist 4 manages to be very captivating, even if it doesn't reach the benchmark set by the previous seasons. It also continues to impress visually, while the background score is just fantastic. Not to mention, the acting is topnotch as always, with Álvaro Morte, Úrsula Corberó, Itziar ItuñoNajwa Nimri and Miguel Herrán doing some exemplary work.

- Isn't as Impressive As the Previous Seasons

- The Violence Feels Gratuitous At Times

Money Heist Season 4 will continue to thrill its fans, even if the quality drops a bit. All eight episodes of the series is streaming on Netflix.

(The above story first appeared on LatestLY on Apr 05, 2020 06:31 AM IST. For more news and updates on politics, world, sports, entertainment and lifestyle, log on to our website latestly.com).