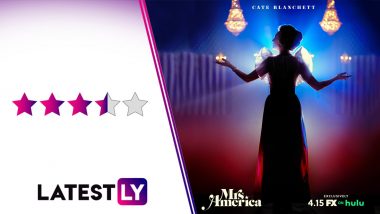 Mrs America Review: When you watch Mrs America, you cannot help but not ignore the Marvel connection in the new limited series, the first three episodes of which is streaming on Disney Plus Hotstar. Not just talking about 'Mrs America - Captain America' stuff, but also look at the cast. Cate Blanchett (Phyllis Schlafly) played Hela in Thor: Ragnarok. John Slattery, who plays Phyllis's husband Fred Schlafly, was Howard Stark in MCU. Rose Byrne (Gloria Steinem) was part of the X-Men Prequel saga, while James Marsden, who appears in the first episode as politician Phil Crane, played Cyclops in the original X-Men trilogy. There is also Elizabeth Banks (Jill Ruckelshaus) who had a small role in Sam Raimi's Spider-Man trilogy. Not to forget, director duo Anna Boden & Ryan Fleck, who helmed the first two episodes, had also directed Captain Marvel. Irresistible Trailer: Steve Carell and Rose Byrne Head for a Democrat Vs Republican Clash in Jon Stewart's Political Satire (Watch Video).

And 'Marvel' is also the word I would associate with most of my experience of watching Mrs America, only I would add the suffix '-lous'. Mrs America is based on the ERA (Equal Rights Amendment) movement of the '70s, and the stiff opposition it faces from a group of women belonging to the Conservatives. Leading the charge is Phyllis Schlafly, who has riled up the other housewives in her community to protest against the rise of feminism that, in her view upsets the natural order.

The funny part is that Phyllis and her group fail to realise that in their fight to keep housewives as housewives, they have become activists on their own, which keeps them away from their kitchens. They become the very thing they detest.

On the other side of the war, is the free-spirited journalist/activist Gloria Steinem who is rallying up support not just for ERA but also for the rights for a woman to have voluntary abortion. There is also Shirley Chisholm (Uzo Aduba), the first black woman candidate to run for the US Presidential elections. The oneupmanship game between these two groups to uplift and undermine the ERA movement at the same time is what makes Mrs America so fascinating.

Or may be it is the cast. After all, how can you not like something that has Cate Blanchett in it? Mrs America has the same feelings that I have towards Blanchett, which explains a bit too much focus on Phyllis than the other major characters, even if the episode doesn't revolve around her (each episode is named after every major player in the saga). Gloria and her team's persistent efforts to gain support for the act from the public and the politicians do evoke your sympathies, and Rose Byrne is incredible in the role. Also, watch out for Margo Martindale who is absolutely brilliant as Gloria's compadre, Bella Abzug. Shirley-focussed episode (the third one) is comparatively weaker, but the actress brings a dignified grace to the proceedings.

Watch the Trailer of Mrs America:

But there is no denying that the best portions involve Phyllis and her girls, blissfully ignoring the sexism and patriarchy that is suppressing them, to fight against a movement that could upheld their rights. Even if you do not agree with her views, you would be drawn towards the compelling power of persuasions that Phyllis, has strengthened by Blanchett's magnetic performance. Also worth applauding is the detailing involved in the making, from the costume designs (loved Byrne's hippie wardrobe) to the tinted-camerawork.

- The Making and The Moments

While we are only just three episodes down, Mrs America really looks an compelling drama, strengthened by its awesome cast, that feels pretty relevant despite being set a few decades back.

(The above story first appeared on LatestLY on Apr 16, 2020 06:35 PM IST. For more news and updates on politics, world, sports, entertainment and lifestyle, log on to our website latestly.com).