Sidharth refuted the reports that he had been roped in for Naagin 4 and was quoted as saying, "No, this is all untrue." Well, let us hope that the saying 'Sabr ka fal meetha hota hai' comes to play here and fans of SidRa get to see the duo in another meaty project. 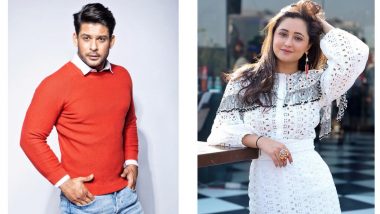 For all you Sidharth Shukla and Rashami Desai fans, who were waiting for the actors, who buried their hatchet inside the Bigg Boss 13 house, to come together in a project, your wait time has increased. A few days back, during an interview, Rashami, was asked about when she will collaborate with Sidharth Shukla. To this, she had said, "Won't answer till anything is concrete." Well, and what followed soon were rumours of how Bigg Boss 13 winner Sidharth Shukla had been roped in to star opposite Rashami Desai in Naagin 4. Rashami, who is playing Shalaka in the show and has been paired opposite Vijayendra Kumeria, is actually Nayanthara, who is back to take revenge from Brinda. While Nia Sharma's Brinda Is Back For Revenge, Rashami Desai Steals The Show In Her Naagin 4 Promo (Watch Video).

Right before the Bigg Boss 13 finale, it was being said that Sidharth and Rashami will be seen in a reality game show tentatively titled 'Khatron Ke Khiladi All-Stars,' where ex-contestants of the previous seasons of Fear Factor will be seen competing against each other. And after Rashami's interview, reports started rolling in that Sidharth will be roped in as a snake charmer and an accomplice to Shalaka and the duo will be seen plotting and making life hell for Brinda (Nia Sharma).

It was also reported that Sidharth had not only signed on the dotted line, but was also all set to start shooting for the show, but because of the Coronavirus lockdown and subsequent shut down of shoots all over, the project had been delayed. Naagin 4: Rashami Desai Replaces Dil Se Dil Tak Co-Star Jasmin Bhasin, Check Out Her Look (View Pics).

However, Sidharth Shukla has slammed these reports and denied the fact that he is a part of Naagin 4. In a conversation with India Forums, Sidharth was quoted as saying, "No, this is all untrue." Well, let us hope that the saying 'Sabr ka fal meetha hota hai' comes to play here and fans of SidRa get to see the duo in another meaty project.

(The above story first appeared on LatestLY on Mar 26, 2020 04:58 PM IST. For more news and updates on politics, world, sports, entertainment and lifestyle, log on to our website latestly.com).