Navina Bole Birthday: 7 Instagram Pictures of the Ishqbaaaz Actress That Prove She's Sassy, Stylish and a Full of Life!

Television actress Navina Bole who is popularly known to the play the character of Tia in Star Plus' hit daily soap Ishqbaaz turns a year older on October 30, 2020. And so here are few gems from her Instagram account. 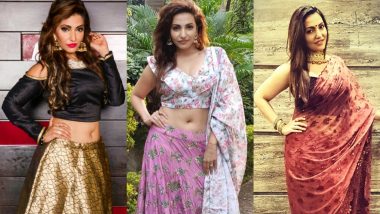 Television actress Navina Bole who is popularly known as Tia from Star Plus' hit daily soap Ishqbaaaz turns a year older on October 30, 2020. However, that's not the only role she has played on the small screen. As earlier to this, she has acted in light-hearted comedy show Jeannie Aur Juju as well as in Miley Jab Hum Tum as Diya Bhushan. She is a trained Bharat Natyam dancer and enjoys a massive fan following on social media. And as she celebrates her birthday today, we thought of handpicking some of the best gems from her Instagram. Ishqbaaaz Fame Navina Bole Makes Her TV Comeback With Taarak Mehta Ka Ooltah Chashmah As the New Woman in Jethalal’s Life and It's Not What You Think (Watch Video).

Currently, Navina has 306K followers on her Instagram with 2330 posts (until now) on her profile. The actress started her career with modelling before entering the world of showbiz. She got married in the year 2017 with the man she was dating namely actor-producer Karran Jeet. And so, on the occasion of her birthday, here are some pretty pics of Navina. Check it out. Ishqbaaaz Actress Navina Bole and Husband Karran Jeet Blessed With a Baby Girl!

Let's Start With A Monochrome Pic Of The Babe Wherein She Looks Hot!

#blackandwhite coz theres always a bit of black in white and a bit of white in black!! Its all about perspective!!😈👿

Can We Steal Her Sassy Caption?

When Navina Walked The Ramp Looking Glam In A Desi Couture!

Be a force to reckon with!! Shine on no matter what!! Coz they cant keep a good thing down for too long!!😎👸❤ #selflove #bombaytimesfashionweek #sareenotsorry

Her Love For Everything Fashionable Is So Visible!

And when you love a look so much how can you post just one pic!!🤩 This is just❤️!! @shaybyanisha @emmzworld1994 @makeupbydeepti

Floral dreams are made of these. . In love with this lehenga set from @eiaraak . . Couldn’t stop twirling and feeling like a princess adorned in this beauty! Totally helps it’s in my fav colour! P.S they customise all types of outfits be it ethnic, indo-western or western! Go get ur fix of beautiful ensembles from @eiaraak and flaunt!🌟💃🏻

And That's How You Do Black And Gold Together!

Wear ur attitude! It’s ur best outfit!😎 fab make up by @snehavyas_makeuparchitect lovely jewellery by @rimayu07 clicked by @achchabacha and a jaw dropping outfit by @upgrade1116 love love love this look❤️

Navina With Her Fam!!

SWIPE LEFT 👈👈 In recent years we have not only grown as a couple but as a strong unit of compatible & loving partners as well! Jeet and me never really realised that besides working together on so many momentous things while tending to our little one, breastfeeding could also be one of the things that we could do as a team!😮 But it wouldn't have been possible for us to do so if it hadn’t been for @PhilipsAvent_India to help us in our wonderful journey!😇 I have to say our perception towards breastfeeding has completely changed ever since we began using the Philips Avent Breast Pump for feeding Kimaayra👶! Being #PartnersInBreastfeeding with Jeet is truly a joy I can't put in words. We as parents really cherish this fantastic endeavor by Philips Avent and would totally suggest our fellow parents to switch to this reliable brand for the safety and comfort of mothers and babies!🙇

Recently, the actress had made headlines for posting a pic of herself on Instagram and announcing that she has been tested for positive for COVID-19. She had uploaded a sexy photo of herself with a badass caption. Lastly, we wish her a happy 37th. Stay tuned!

(The above story first appeared on LatestLY on Oct 30, 2020 09:11 AM IST. For more news and updates on politics, world, sports, entertainment and lifestyle, log on to our website latestly.com).