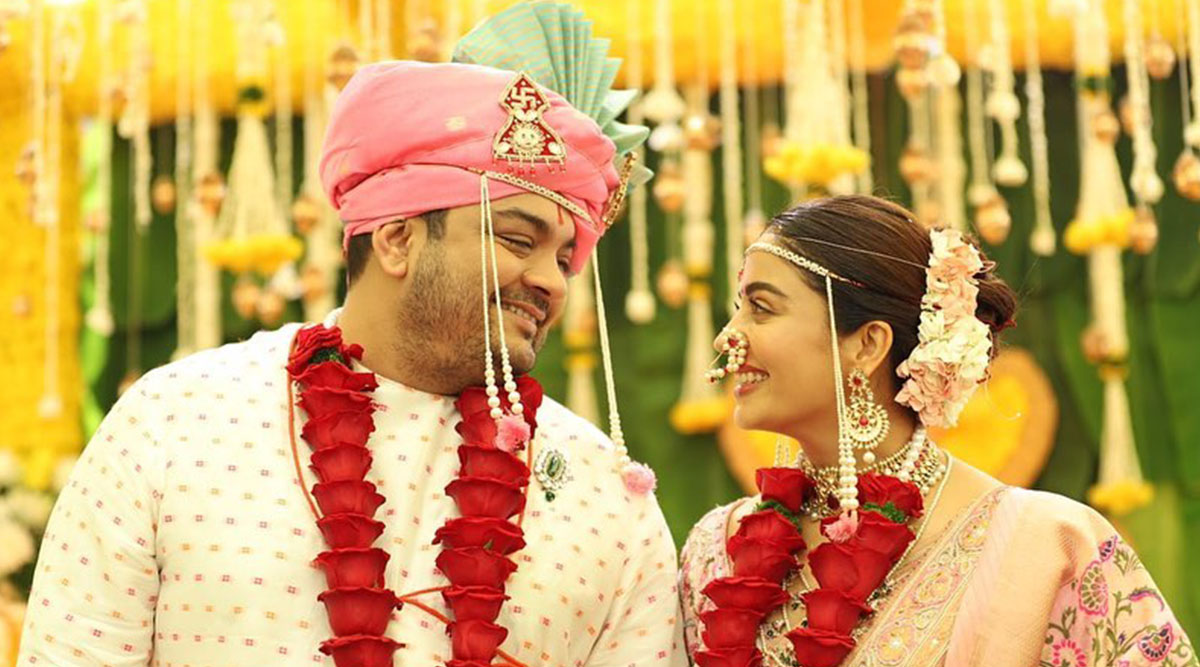 Past is history, is a concept that is lost on some trolls that actress Nehha Pendse has been fielding off these days. Barely four days after she tied the knot with her boyfriend Shardul Singh Bayas. Back when the lady had made the news of her relationship with Shardul, she has been at the constant end of trolls for his weight. Nehha did shut them down but new trolls have emerged after it came to light that Shardul has had two divorces before his union with Nehha and also has two daughters from his previous marriage. Here Are The First Pics Of Bride Nehha Pendse and Groom Shardul Bayas!

Clarifying and questioning why Shardul's past is becoming a huge issue, Nehha told BT, "What's the big deal about this? Today, many of us are getting married late because of various reasons, including the focus on career. A lot of people end up having more than one relationship before finally tying the knot. The commitment, love and physical proximity could be the same as it is in a marriage, the only difference is that there is no legal stamp over it. So, why are people talking about Shardul being a divorcee? It's not that I am a virgin either. I appreciate the fact that he took chances with women he was in love with, unlike in my case where the men disappeared just when the relationship could have culminated into marriage. At least, Shardul is not commitment-phobic. I salute him for his undying faith in the institution of marriage, it is easy to not believe in it after two failed marriages. That shows that he is a man of substance unlike those who fear the idea of getting married. I also feel that if a marriage is not working out, one should end it rather than drag on." Nehha Pendse Hits Back At Trolls Targetting Her Fiance Shardul Singh, Reveals She'll Tie The Knot in 2020! (Read Details)

In fact, Nehha has already met with Shardul's wife and daughters. Revealing the same to the daily, Nehha was quoted as saying, "His first marriage ended around 10 years ago and second, five years ago. They (his first wife and daughters) were gracious enough to meet me and I realised that their relationship had ended amicably. They were young when they got married and made some mistakes. But what’s important is that they remain cordial and Shardul is a doting father." Nehha Pendse Lip Locks With Fiance Shardul Bayas As She Bids Goodbye to ‘Single Life’ (View Pic)

Stating that she is a very practical person and does not take the ideal romanticised love stories shown in films to heart, Nehha went on to conclude, "I am extremely practical and aware of the fact that anything can go wrong even in a seemingly strong relationship. I have been married for just a few days, and can’t predict how things can change in a few years. All I can say is, I am open to embracing everything that life has to offer me. Janam-janam ka saath is restricted to just films, real life is a lot more than that. On the positive side, I think Shardul won’t make the mistakes that a rookie husband might. He knows better what works in a marriage and what doesn’t. He will know before me when we have headed in the wrong direction and will guide me through it."