Nikki made her acting debut with a Telugu film 'Chikati Gadilo Chithakotudu'. Later, she also did a Tamil film Kanchana 3. 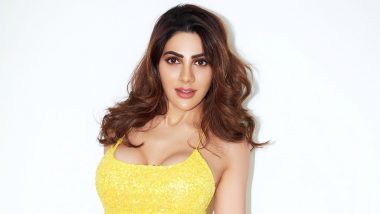 Bigg Boss 14 fame Nikki Tamboli talks about shooting for her upcoming music video 'Chhori' with a fever of 102 degree celsius. The 26-year-old actress, who also took part in Khatron Ke Khiladi 11 reveals: "I believe in working on something which drives me, and after a while I'll be seen in a project. Shooting for this song was a memorable experience for me." Nikki Tamboli, Chahatt Khanna Got Expensive Gifts From Conman Sukesh Chandrashekhar, ED Claims in Statement.

Nikki made her acting debut with a Telugu film 'Chikati Gadilo Chithakotudu'. Later, she also did a Tamil film Kanchana 3. She shot to fame with her TV debut in Bigg Boss 14. She recalls shooting for the track despite her illness as she believes in giving her best. Anupamaa Actress Madalsa Sharma Puts On Sexy Beachy Show in Red Hot Bikini, Shares Fun Travel Pics on Instagram.

"I remember shooting for it, while I was down with a high fever. But I kept going as I am very passionate, when it comes to my work and my love for dance. My fans have been so patient and so supportive throughout and I am damn sure that they'll love it when it's out," she adds. 'Chhori' features Nikki Tamboli and Tanmay Ssingh. It is sung by Sonu Kakkar, Vee Kapoor and Danish Sabri. The song will be out on November 10.

(The above story first appeared on LatestLY on Nov 08, 2022 04:10 PM IST. For more news and updates on politics, world, sports, entertainment and lifestyle, log on to our website latestly.com).