Orphan: First Kill is a horror film directed by William Brent Bell and is a prequel to the 2009 film Orphan. It stars Isabelle Fuhrman, Julia Stiles, Rossif Sutherland, Matthew Finlan, Hiro Kanagawa and more. Sadly, the film has leaked onto torrent sites. 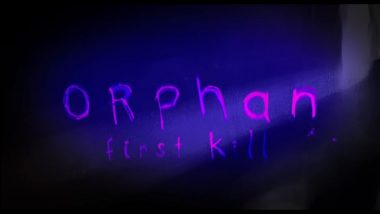 Isabelle Fuhrman-starrer Orphan: First Kill was released on Paramount+, on August 19, 2022, in the United States. Directed by William Brent Bell, it was produced by Paramount. The film is a prequel to the 2009 film Orphan and tells us the origins of Esther as she tries destroying another family after escaping from a psychiatric facility. The movie has opened to positive reviews from critics. However, after release, Orphan: First Kill leaked on to torrent sites and is available from streaming on them as well. Orphan – First Kill Trailer: Isabelle Fuhrman’s Esther Is Back to Horrify; Film to Stream on Paramount+ and Release in Theatres on August 19 (Watch Video).

However, this is not the first time, a movie has been leaked or surfaced online for free watch. As almost all film becomes the victim to this mess, it's very sad. In the past, many strict actions and restrictions were taken against these sites, but even after getting blocked, the sites rebound elevating piracy and illegal download options. The cyber cell needs to take serious action regarding this. This really needs to be stopped with hard steps. Prey Full Movie in HD Leaked on TamilRockers & Telegram Channels for Free Download and Watch Online; Amber Midthunder's Predator Film Is the Latest Victim of Piracy?

(The above story first appeared on LatestLY on Aug 19, 2022 01:46 PM IST. For more news and updates on politics, world, sports, entertainment and lifestyle, log on to our website latestly.com).