OTT Releases Of The Week: Human on Disney+ Hotstar, Yeh Kaali Kaali Ankhein on Netflix, The Tragedy of Macbeth on Apple TV+ and More

Take a look at every OTT release of the week including movies and series lined up for release on Disney+ Hotstar, Netflix, Apple TV+, Amazon Prime Video and Voot Select. 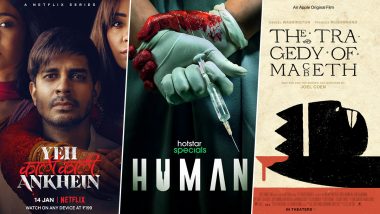 We are going to take a look at every upcoming OTT release of the week including movies and series lined up for release on Disney+ Hotstar, Netflix, Apple TV+, Amazon Prime Video and Voot Select. Speaking about the first series is the Netflix show Yeh Kaali Kaali Ankhein which is all set to premiere on January 14. It stars Tahir Raj Bhasin, Shweta Tripathi and Anchal Singh in the lead and revolves around Tahir’s role that moves the plot forward as he is pulled in opposite directions by two women in his life. The next promising release that also releases on January 14 is  Shefali Shah and Kirti Kulhari's medical thriller series Human. It will premiere exclusively on the Disney+ Hotstar platform. The show will touch on sensitive issues like the value of human life, medical malpractice, class divide and ramifications of a fast-paced medical science etc. Vikrant Rona: Makers of Kichcha Sudeep’s Film Reject Rs 100 Crore OTT Deal, Stick to Its Theatrical Release.

William Shakespeare's classic play gets a film adaptation with  Joel Coen's The Tragedy of Macbeth that is all set to premiere on Apple TV+ on January 14. It stars Denzel Washington, Frances McDormand (who also produced the film), Bertie Carvel, Alex Hassell, Corey Hawkins, Harry Melling, and Brendan Gleeson in major roles. Other releases include Ranjish Hi Sahi on Voot Select starring Tahir Raj Bhasin, Amala Paul, Amrita Puri which is about a love triangle to say the least. Putham Pudhu Kaalai Vidiyaadha is an anthology Tamil series releasing on Amazon Prime Video on Jan 14. Take a quick look at every OTT releases of the week. Jacqueline Fernandez Releases Statement After Her Picture With Conman Sukesh Chandrasekhar Goes Viral.

(The above story first appeared on LatestLY on Jan 09, 2022 04:19 PM IST. For more news and updates on politics, world, sports, entertainment and lifestyle, log on to our website latestly.com).