Jitendra Kumar, Neena Gupta and Raghubir Yadav's comedy-drama series Panchayat Season 2 was released on Amazon Prime Video on May 18. Having said that, sadly the series is the latest victim of piracy, as it has been leaked online for free watch and download. 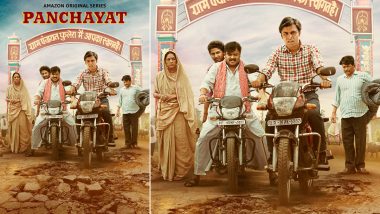 Jitendra Kumar, Neena Gupta and Raghubir Yadav's comedy-drama series, Panchayat Season 2 arrived on Amazon Prime Video two days before the scheduled release date on May 18. The synopsis of the show reads, "It captures the journey of an engineering graduate Abhishek, who for lack of a better job option joins as secretary of a panchayat office in a remote village of Uttar Pradesh. Stuck between crazy villagers & a difficult village lifestyle Abhishek starts his job with the sole motivation of getting out of there as soon as possible, for which he even prepares for CAT." Having said that, as per the reviews, the season 2 of the web show has garnered positive reactions from the critics and netizens. However, unfortunately, within a few hours after its release on the OTT platform, Panchayat Season 2 got leaked online. The series is now available for streaming on torrent sites. There's an HD print available of the series to watch online. Panchayat Season 2 Review: Jitendra Kumar, Neena Gupta and Raghubir Yadav’s TVF Series Maintains Its Amusing and Crackling Form Nearly Throughout!

However, this is not the first time, a series has been leaked and surfaced online for free watch and download. Almost every show falls prey to this chaos. In the past, many strict actions were taken against these pirated sites, but even after getting blocked, the websites bounce back promoting piracy. This needs severe action by the cyber cell. This really needs to be stopped with hard steps in future. Panchayat Season 2 Trailer: Jitendra Kumar’s Amazon Prime Video Series Returns With Promise of Double Entertainment (Watch Video).

For the unversed, Panchayat Season 2 sees Jitendra Kumar as Abhishek Tripathi, Neena Gupta as Manju Devi and Raghubir Yadav as Brij Bhushan Dubey in key roles. Apart from the leads, the series also stars Biswapati Sarkar and Chandan Roy, among others. Panchayat Season 2 is currently streaming on Amazon Prime Video.

(The above story first appeared on LatestLY on May 19, 2022 06:41 PM IST. For more news and updates on politics, world, sports, entertainment and lifestyle, log on to our website latestly.com).