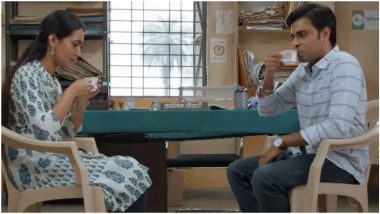 Panchayat is one of Indian OTT medium's better series, and the new season of the TVF show that's streaming on Amazon Prime Video, just reiterates that. Panchayat revolves around a young city-educated man who reluctantly takes a post of Panchayat secretary in a far flung village called Phulera where the pradhan is a housewife, and her husband becomes the quasi sarpanch. The series stars Jitendra Kumar, Raghubir Yadav, Neena Gupta, Chanday Roy (who also wrote the series) and Faisal Malik. The series is directed by Deepak Kumar Mishra. Panchayat Season 2 Review: Jitendra Kumar, Neena Gupta and Raghubir Yadav’s TVF Series Maintains Its Amusing and Crackling Form Nearly Throughout!

The first season ended with Abhishek (Kumar) finally adjusting to his new environs, and meeting Rinky, daughter of Manju Devi and Brij Bhushan Dubey, thereby hinting at an attraction. The second season doesn't straightaway establish this love story, but gradually builds on the attraction, as Abhishek tries to solve Phulera's problems while keeping his friendship with Brij and his acolytes intact, while Rinky tries to appease to her parents by agreeing to arranged marriage alliances.

There are also obstacles in place for Abhishek, Brij and co in form of Bhushan (Durgesh Kumar) and his wife Kranti (Sunita Rajwar), both eyeing the Pradhan's seat in the next elections. Another antagonist is MLA Chandrakishore Singh (Pankaj Jha), an arrogant and abusive politician who insults Abhishek and leaving him dejected with his comrades for not backing him up. The finale of Season 2 expected the heroes to clash with their foes, but an unexpected tragedy derails both this clash and our expectations. Before we decode the finale and what it means for season 3, let's warn you that the below episode has MAJOR SPOILERS.

Brij Mohan Pandey-Manju Devi and Bhushan-Kranti compete over who gets to score more political brownie points in the upcoming temple festival. Brij tries to take the support of the MLA, but latter's abusive comments towards an absent Abhishek, and his rude behaviour towards Vikas and Prahlad Pandey leaves Brij Mohan angry and they are thrown out of the house. As they wonder what their next move is, Prahlad receives a call that leaves him visibly distressed.

We later learn that the call is about his son, who was enlisted in the army, and he was killed in action. The entire village mourns over his sacrifice, including 'enemies' Bhushan and Kranti, showing how tragedy brings people together, especially the death of a national hero. The women of Phulera led by Manju and Rinky refuse to allow the MLA to get in the village to have his mic and podium so that he can score politics over the young man's death. A flustered MLA retreats but not before he promises to handle Abhishek, who was nowhere in the scenario.

In the evening, Brij Mohan, Abhishek and Vikas come together to console Prahlad, showing that despite that their differences, their friendship has forged stronger. But whether this friendship would face a roadblock when Abhishek and Rinky's attraction turns to something deeper, remains to be seen.

The Tribute and the Eye-opener

It was unexpected that Panchayat season 2 would drop this emotional tribute to the brave soldiers of the Indian army who are sacrificing their lives for the motherland. But the tribute comes with some eye-opening truth bombs. Through two journalists who come to cover the martyr's funeral, it is told how most of the soldiers come from villages, because this is the best job that pays for Rs 20-25k, but that doesn't belittle their sacrifice. They also remind that the young soldier might be a hero for the village and the whole nation, but it is only the family who would feel the loss the most, and no amount of salutations can take away that.

MLA's ire towards Abhishek is irksome but understandable from the former's POV. Earlier in the season, Abhishek inadvertently made the MLA lose political mileage by releasing Brij, Vikas and Prahlad from police station. The fact that he is a mere panchayat 'secretary' allows the MLA to remind Abhishek of his 'aukaat'. The scene reminds us how easy it is for the politicians to strongarm government employees as per their whims, which is reiterated in the MLA's final scene in the last episode when he decides to punish Abhishek and get him transferred despite the fact that Abhishek was nowhere near the scene, and has nothing to do with the roko. The MLA knows that he can't take on the pradhans of the village so easily, but a mere government employee is easy to handle, right?

What to Expect in Season 3?

We will definitely see ramifications of MLA's insult on Abhishek's tenure. It has to be seen if Manju Devi, Brij Mohan would rally behind Abhishek, and whether that support remains when they learn that Rinky has a soft corner for him. Abhishek's MBA aspirations have also taken a backseat this season, so if the romance develops - and I am rooting for that - will he choose the girl or an exit out of the village? OTT Releases of the Week: Jitendra Kumar’s Panchayat Season 2 on Amazon Prime Video, Siddharth’s Escaype Live & Mohanlal’s 12th Man on Disney+ Hotstar and More.

Another character to watch out for in the next character would be the bereaved Prahlad. Till the last episode, the character was comical in nature with his lackadaisical attitude but after losing his wife and now son, he is a loner now. So would we be expecting a downbeat Prahlad in the next season? How would Vikas, who was often paired with Prahlad, deal with his comrade's new behaviour stance?

Finally let's not forget that while Bhushan-Kranti and Manju-Brij might have forged a temporary truce over Prahlad's son's death, but they are still political foes, and there is an election coming. It remains to be seen how Bhushan-Kranti keep making new roadblocks for the protagonists, and whether their actions would make Brij and gang to do faster development for Phulera. I would have bet about a possibility that Bhushan-Kranti might collaborate with the MLA, but Panchayat is a show that keeps surprising you at surprising junctures.

Just saying that we can't wait for Amazon Prime Video and TVF to announce Panchayat 3. It should come up, considering how the second season has left quite a few strands open.

(The above story first appeared on LatestLY on May 20, 2022 04:48 PM IST. For more news and updates on politics, world, sports, entertainment and lifestyle, log on to our website latestly.com).