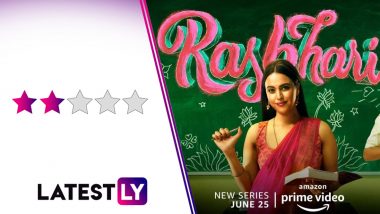 Rasbhari movie review: Amazon Prime Video suddenly drops Rasbhari without any fanfare and here we are talking about it. A coming-of-age comedy, Rasbhari is one of those small-town stories which attempts to be real and relative. The story is of Meerut where getting laid is still more important than academics. Nand (Ayushmaan Saxena) is a  Standard 11 student who wants to lose his virginity before he is promoted to the next class. When he is still navigating between Rakhi-zone to friend zone with his classmate Priyanka (Rashmi Agdekar), a new English teacher enters by the name of Shanoo Bansal (Swara Bhasker). Discovered Faith While Shooting for ‘Raanjhanaa’: Swara Bhasker on Film’s Seven Year Anniversary

Soon enough rumours of her sexual rendezvous with other men while her husband is out on work tours, create a huge stir in the sleepy city. Nand, who lusts over her, initially refuses to believe Shanoo has many partners. So he tries to snoop on her with the help of a maid but he wasn't ready for the spoiler on the maid's neck. Nand convinces his father to let Shanoo tutor him. But when he makes a move, his world comes crashing down. However, it is nothing compared to what he learns about Shanoo and her alter-ego.

The first episode starts on an annoying note with everyone on the scene trying to drill in you 'Ye Meerut hai' every alternate second. And yet they forget to add anything substantial to the introduction. However, it gets better gradually as the characters are introduced. Abled by some wicked one-liners, the nuances of small-town and the people impress you instantly. Be it the writings on the walls of toilets that we are so familiar with from our school days or creeps in the class, Rasbhari leaves nothing behind. That helps you to get in tandem with the narrative quickly. The kitty parties where the women discuss lost spark in their marriages to their husband's roving eyes are so telling and yet so amusing to watch.

Nand and Priyanka's relationship graduates from rakhi to Sakhi to something more and leaves you with a smile on your face every time. It's handled really well. But the linear narrative gets repetitive soon enough. The wives keep plotting against Shanoo, men continue to queue up and Nand keeps dreaming about his day under the sun. The pace also drops which threatens to wane your interest. It also bothers me how Nand is suddenly shown righteous when he slaps his friend for passing lewd comments at Shanoo just because he learned about his teacher's personality disorder. He was a party to that not too far ago.

The series very weakly touches upon the concept of personality disorder. The lazy writing in the form of flashbacks to show how Shanoo grew up doesn't lend to the cause at all. Many would say the end justifies this neglectful behaviour towards the concept but till you reach the climax, it keeps nagging you. Swara Bhasker On Twitter Trend #ArrestSwaraBhaskar: And That My Friends Is Why Most Celebrities in India Only Raise Their Voices For Elephants!

Ayushman Saxena as Nand is brilliant. His unwavering agenda to get laid soon has plenty of amusing moments. He has the best lines in the show and does full justice to them. I will be surprised if he doesn't mirror some boys from your school. Swara Bhasker aces her act but it's hardly much. She doesn't get much scope because her job was to look hot so that men can fawn over her. Even the alter-ego Rasbhari is just about okay.

Rasbhari is a coming-of-age show which will get the clicks for its content but it will be a challenge to keep them interested till the end. The first season is streaming on Amazon Prime Video.

(The above story first appeared on LatestLY on Jun 25, 2020 05:32 PM IST. For more news and updates on politics, world, sports, entertainment and lifestyle, log on to our website latestly.com).