NV is discussing with the neurosurgeon about Sid’s case who says that it’s impossible for Sid to go through surgery as he already had a tumour in his brain. If the surgery takes place then his brain cells may get damaged. On the other hand, Sid wakes up and gets happy seeing Ishaani. 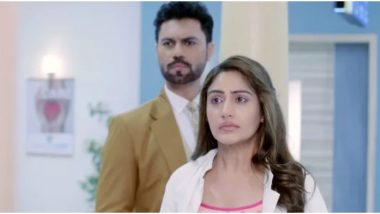 In the last episode of Sanjivani 2, an intoxicated NV injures himself after confessing his feelings to Ishaani. Later, NV and Ishaani gather along to celebrate Mahashivatri. In tonight’s episode, we see NV (Gaurav Chopra) searching for the divorce papers everywhere. Bebe comes there and asks what’s he searching for. He says about the divorce papers and says that he wants to give Ishaani (Surbhi Chandna) what she wants. Bebe asks him to give Ishaani sometime but NV says that it’s been three years since he tried but nothing changed. Neither he could take her out of depression nor could he confess his feelings for her. Sanjivani 2 February 20, 2020 Written Update Full Episode: Ishaani Demands For Divorce From NV.

Bebe says that Ishaani is still under depression he needs to understand her. She has so many things going in her mind that she couldn’t differentiate between right and wrong. She advises him to not give up on Ishaani so easily. Nv gets into thinking while Bebe leaves. Sanjivani 2 February 18, 2020 Written Update Full Episode: Ishaani Barges out of the Room After NV Tells Sid That He’s Lucky to Have Found His Love After Three Years.

Ishaani completes making the Shivling and Bebe praises her for creating it so beautifully. She asks her to take the Shivling and everyone gets ready to go to the temple. Ishaani struggles to lift it alone and NV gives hand to her. They both have an eye lock.

Everyone comes to the temple and places the Shivling in its place. Pandit asks NV and Ishaani to sit together for pooja. Ishaani hesitates but still agrees and does pooja with him. NV thinks that Ishaani is already depressed about so many things that if he pushes her from his life too then she’ll be completely amiss. Ishaani wishes to get a divorce from NV and gets relieved from both Sid (Namit Khanna) and NV from her life so that she could live in peace.

Ishaani tries tying the cloth around the temple bells for mannat, NV helps her. He asks her to ask something else to God as he’s granting her wish for divorce once Sid gets cured by her. Ishaani gets shocked by his sudden decision.

The next day Ishaani comes to Sanjivani and thinks to cure Sid as soon as possible and get her answers to get relieved from both Sid and NV forever from her life. She enters the hospital still nervous and takes her depression pills. She enters Sid’s ward to find Rahil and NV already there. Rahil thanks NV for arranging the best neurosurgeon for Sid despite being difficult to get his appointments. NV says that he wants Sid cured and sees Ishaani. He informs Rahil about Ishaani taking over Sid's case and leaves.

NV is discussing with the neurosurgeon about Sid’s case who says that it’s impossible for Sid to go through surgery as he already had a tumour in his brain. If the surgery takes place then his brain cells may get damaged. On the other hand, Sid wakes up and gets happy seeing Ishaani.

He says that he’ll be cured permanently when she’s with him. Ishaani asks him to take care and leaves. Mr Mehta says that the chances are nil for saving Sid or him getting his memory back. NV finds Ishaani on the door but hides her about Sid’s condition. He prevents her from interacting with Mr Mehta too. Ishaani finds it suspicious.

In the precap, Ishaani reads the reports and gets to know the truth. She gets angry.

(The above story first appeared on LatestLY on Feb 24, 2020 06:45 PM IST. For more news and updates on politics, world, sports, entertainment and lifestyle, log on to our website latestly.com).