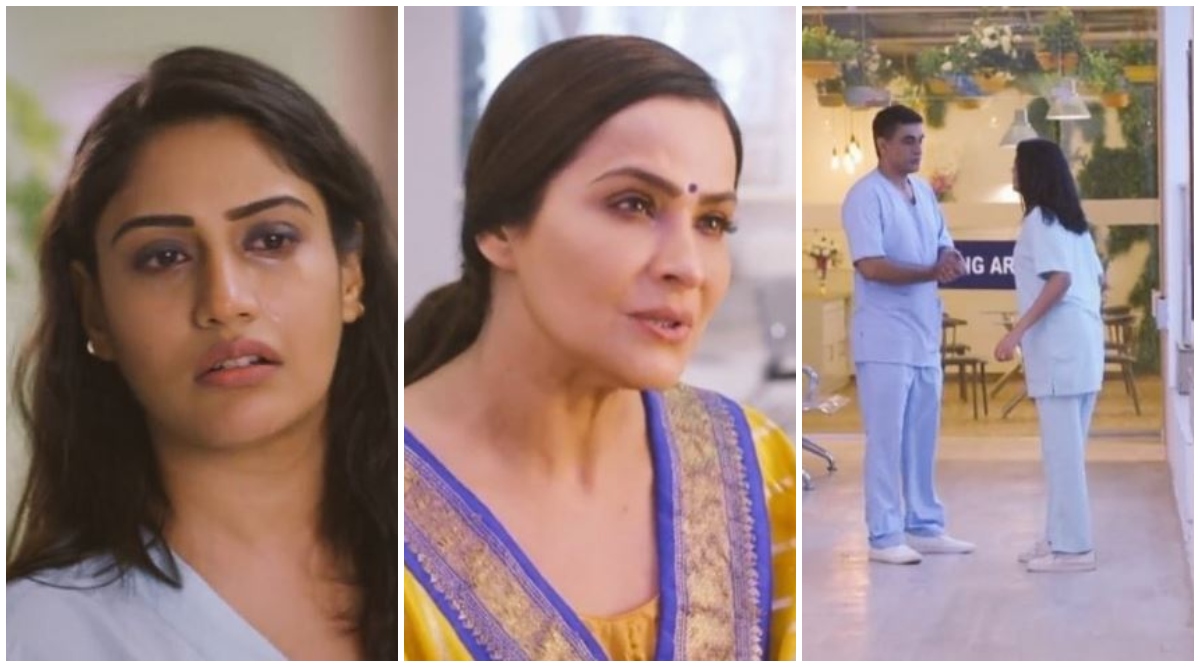 In yesterday’s episode of Sanjivani 2, we saw Sid getting severely injured when a goon hits him on his head with a bottle. Later, the doctors admit Sid to the hospital as he faints after saving Ishani. Tonight’s episode starts with Ishani (Surbhi Chandna) seeing Sid (Namit Khanna) and saying this happened because of her. Juhi (Gurdeep Kohli) comes and hears her. She asks who has applied this chest tube. Asha narrates what happened at the Ganesh Pandal and that they did what they could, to save him. Juhi asks Ishani to go out and tells her that this did not happen because of her. Later she asks the sister to stabilize Sid. Shashank (Mohnish Behl) comes there and sees Sid and is shocked. Juhi stops him and tells him to go out and that she will take care of him. She asks the nurse to get brain scans done. Meanwhile,  Sid’s mother comes there and gets emotional seeing Sid’s condition. Sanjivani 2 September 19, 2019 Written Update Full Episode: Sid Gets Seriously Injured While Saving Ishani From The Goons!

Later, Juhi comes out and tells everyone that they have to take Sid to the O.T. as a surgery needs to be performed immediately. Ishani runs and goes out. Juhi says we will start the procedure. Juhi asks Ishani to stay outside and that this is not the time to get emotional. Ishani says she is ready and cries. Juhi says don’t argue and asks her to stay out of the O.T.  Juhi says we have to stable him first. Ishani goes to Bappa and prays that Sid should be fine and gets emotional. She recalls her childhood. Ishani says she will start believing good from today and says Sid may lie, his ways are different, but his intentions are always clean, he is a good doctor and good person, he is her friend, and they need him, and prays to God to save him.

On the other hand, Shashank thinks of Sid and cries. Everyone prays for Sid. Ishani comes to Shashank and says this happened because of her. Shashank promises her that everything will be fine and consoles her. Later, Shashank comes for the surgery. Juhi stops him and tells him to go out and trust her. Shashank says nothing should happen to him. Juhi says nothing will happen. Meanwhile, Sid’s mother says he doesn’t think of the outcome and that she is proud that he did this to save a girl’s respect. Ishani says Shashank uncle… and Sid’s mother goes and hides. Shashank says Juhi doesn’t want him to be in the OT as she knows what Sid means to me. Sanjivani 2 September 20, 2019 Preview: Sid Gets Beaten Up To Save Ishani And She Begins To Feel For Him, But Will He Survive? (Watch Video)

Just as Juhi finishes the surgery, Anjali arrives and says that she just got to know about Sid and asks for Shashank. Ishani tells her that Juhi is operating him and that Shashank is in his cabin. Juhi comes out of the OT and sees everyone. Ishani thinks of Sid and cries, while everyone expectantly looks at Juhi.

In the next episode, Ishani thinks about Sid's actions and wonders that he has done what nobody has ever done for her. She later begins to realise that she has feelings for Sid.