Sexify: From Cast to Plot, All You Need to Know About Hot New Series on Netflix That Sizzled Its Way to the Top Spot!

Have you never explored the daunting world of intimacy? Then Netflix's latest new series, Sexify is here to your rescue. As trust us, it is going to give you the best feeling ever. Watch and you all things about it now. 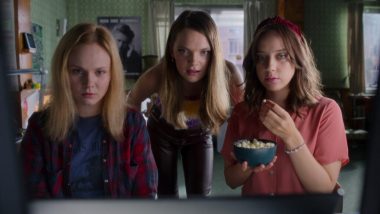 Sexify - All You Need to Know (Photo Credits: YouTube)

Streaming giant, Netflix might be known for churning original shows and films to the audience and serving pure entertainment. But another, best thing about the OTT platform is that it also offers content from around the world. A few days ago, it launched its polish comedy-drama titled Sexify... and well the name has surely attracted the audience. However, the show is not wholly on sex and has a fresh storyline that has grabbed the youth's attention. Nah, it's not even kinda inspired by Sex Education... but the series is gripping with great performances. So, let's dug in deeper and know all things about Sexify, which holds the number one spot on Netflix. Bridgerton's Simon and Daphne's Sex Scenes: Regé-Jean Page and Phoebe Dynevor Raunchy Love To Get Hotter in Season 2?

The first episode of Sexify went live on April 28 and has been a fan favourite since then. Right from Twitter to Quora, the show has become the talk of the town and how. It is originally a polish show, but of course, there are English subtitles and audio to your rescue.

The premise of the show will make you smile, laugh, and also emotional. As the first season is all about how a sexually inexperienced student and her pals build a high-tech app that helps people understand female orgasm. All this to win a tech competition. Interesting, right? The Queen’s Gambit: Anya Taylor-Joy Feels the Netflix Show Has Changed Her Life Forever.

Well, sadly, season two of Sexify has not been announced yet by the makers. The main reason behind the same would be that the series is still two weeks old and as per its engagement, they might make a decision to renew the show or not.

Season one of Sexify has been garnering love from the audience as well as critics alike. On IMDb, the show stands at a decent rating of 6.6/10 whereas on Rotten Tomatoes it has managed to get 85 percent. Not bad at all. This one os hlemed by Kalina Alabrudzinska and Piotr Domalewski.

(The above story first appeared on LatestLY on May 07, 2021 08:12 PM IST. For more news and updates on politics, world, sports, entertainment and lifestyle, log on to our website latestly.com).