For all the fans of Simon and Daphne from season one of Bridgerton, there is a surprise! As reportedly, Regé-Jean Page and Phoebe Dynevor raunchy love might get hotter in the upcoming season. Excited? 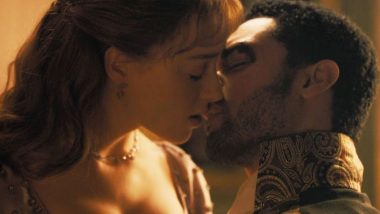 From the time Netflix dropped Bridgerton starring Regé-Jean Page (Simon) and Phoebe Dynevor (Daphne) on the OTT platform, it grabbed a lot of limelight. Right from the twisted love deal between the Duke of Hastings and Daphne to Anthony's back-to-back interference in his sister's life, it's a nice period drama indeed. However, the highlight of the series was the raunchy sex scenes between Simon and Daphne. And well,  if you loved the spiced up scenes in season one, the already announced Bridgerton 2 might get even hotter. Bridgerton Season 2: Release Date, Cast, Plot and More – Everything You Need To Know About This Netflix Period Drama.

As per the second Bridgerton book, The Viscount Who Loved Me, it'll centre more on Jonathan Bailey’s character Anthony, but reportedly, the author wants the makers to deviate their minds a little to Simon and Daphne also. Owing to how the audience has loved the crackling chemistry between Regé-Jean Page and Phoebe Dynevor in season one, the author's say is not wrong at all.

When author Julia Quinn was quizzed by The Sun on will Simon-Daphne be seen in part two, despite the show ahead focusing on Anthony. She revealed, “I hope so. They do show up in the [second] book. The series doesn’t follow the book word for word – and I don’t think [it] should. So I hope so, for no other reason than Daphne has the right to interfere with Anthony’s life. To deny her that chance would be criminal. I think it would be lovely to see.” Bridgerton: Just 10 Hot Pics of Regé-Jean Page That Will Make You Wish He Was Your Valentine Date This Year (View Pics).

Julia also teased fans with Bridgerton season two's storyline. “Anthony is going to get it bad. Jonathan Bailey played him so well; you still love him, but he needs to be taken down a peg, and he is going to be taken down so many pegs. It’s awesome,” said the author. Stay tuned!

(The above story first appeared on LatestLY on Feb 10, 2021 04:13 PM IST. For more news and updates on politics, world, sports, entertainment and lifestyle, log on to our website latestly.com).