Shaheer Sheikh and Ruchikaa Kapoor To Have A Registered Marriage In November, Traditional Wedding To Follow in February 2021 (Deets Inside)

Ever since Shaheer Sheikh and Ruchikaa Kapoor made it official, they have been openly posting pictures of one another on their social media accounts. And now, there is news that the hunk is all set to tie the knot this month, November 2020. 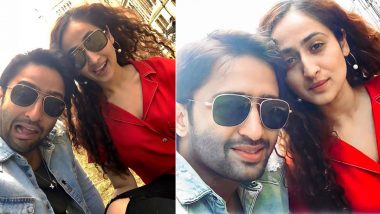 Actor Shaheer Sheikh finally made his relationship with Balaji Telefilms' Film Division head Ruchikaa Kapoor a few weeks back. Shaheer, took to Instagram and in an adorable post, introduced Ruchikaa not only to the world but also to his mother (as per the caption). Ever since, Shaheer and Ruchikaa have been openly posting pictures of one another on their social media accounts. And now, there is news that the hunk is all set to tie the knot this month, November 2020. Shaheer Sheikh Officially Introduces Girlfriend Ruchikaa Kapoor To The World In the Cutest Way Possible (View Post).

As per a report in Bombay Times, the pair will have an intimate court marriage by this month's end and will celebrate their wedding with a traditional ceremony in February 2021. Shaheer and Ruchikaa have been dating for over a year and a half now. Shaheer Sheikh Birthday Special: From Arjun in Mahabharat to Dev in Kuch Rang Pyaar Ke Aise Bhi, 5 Roles That The Hunk Portrayed To Perfection.

“Shaheer is an extremely private person and he does not talk about his personal life. He has never done that in the past, too. He met Ruchikaa through common friends two years ago during the making of the film Judgementall Hai Kya. Both hit it off well and started dating a year-and-a-half ago. Now, they have finally decided to take the plunge," a source told the daily.

The report also read, "Due to the pandemic, the couple will have a low-key wedding. Before the ceremony in Mumbai, Shaheer plans to have a small function at his Jammu home, where his family is based. If the pandemic situation improves, they will have a traditional wedding in Mumbai in February next year." Cogratulations Shaheer and Ruchikaa!

(The above story first appeared on LatestLY on Nov 07, 2020 04:00 PM IST. For more news and updates on politics, world, sports, entertainment and lifestyle, log on to our website latestly.com).