The actor gets candid about his Star Plus show Ek Bhram- Sarvagun Sampanna. 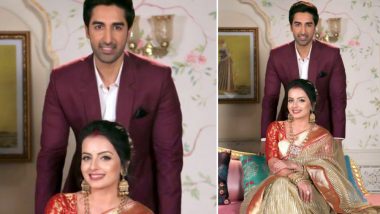 Star Plus’ Ek Bhram- Sarvagun Sampanna was in constant buzz because of it's lead actress Shrenu Parikh turning negative on-screen for the very first time. In the show’s promos too, the voiceover compared Shrenu’s character Jhanvi as the ideal bahu, but at the same time, a person who wants to harm her own in-laws. And while Jhanvi’s character is being appreciated, her on-screen husband, played by actor Ishaan Singh Manhas, is also being lauded for complimenting Jhanvi perfectly on screen. Ek Bhram Sarvagun Sampanna Makers Get Death Threats From Rich Families and the Reason Is Baffling!

Says Ishaan, “Shrenu is actually a ‘Sarvagun Sampanna’ actor in true sense. She can easily portray any kind of character, thanks to her talent, discipline and perfect expressions. Our chemistry and scenes are being loved and appreciated by the viewers.” Ek Bhram Sarvagun Sampanna New Promo: Shrenu Parikh Aka Janhvi Mittal’s Definition of an Ideal Bahu Will Give You Goosebumps; Watch Video

Ishaan, who has been a part of shows like Mere Angne Mein, Krishna Chali London and Ek Mutthi Asmaan among others, became widely popular with his stint as the negative lead in Swim Team. However, he is back to playing a positive role now.

Ask him how he bagged the role of Dhruv Mittal in the show and he replies, “Back in December 2018, I got a call from the production house for the role of ‘Dhruv’. Dipti Kalwani, the producer, had seen my previous work and I had also worked with Star Plus in my last 2 shows. I had to compete with a lot of actors to get this role and got finalized 2 months after my audition."

While Jhanvi pretends to be the ideal wife and daughter-in-law of the Mittals, Ishaan’s character Dhruv is the ideal son. “Dhruv is the eldest son in Mittal Family and is married to Janhvi (Shrenu Parikh). He is today’s ‘RAM’, very positive, he loves his wife, respects his parents and is like a best friend to his brother Kabir (Zain Imam).”

The actor is also all praises for his producer Dipti Kalwani. “Dipti is very sweet, down to earth and is always available whenever we face any issues or if we have any questions related to the story and our characters. Most of the time, she is on set making sure that everything is going smoothly. Very few producers do that. She is 100% dedicated to our show.”

(The above story first appeared on LatestLY on Jun 12, 2019 02:23 PM IST. For more news and updates on politics, world, sports, entertainment and lifestyle, log on to our website latestly.com).