Shreyas Talpade on His OTT App: Want Families to Sit Together on Weekends and Watch Plays Together

Shreyas Talpade regales the audience with perfect comic timing on screen, and his brand of entertainment has always reached out to the entire family -- evident in the Golmaal films, Housefull2, Om Shanti Om or Apna Sapna Money Money. Shreyas, who ventured into producing plays a while back with Nine Rasa, his OTT platform for theatre 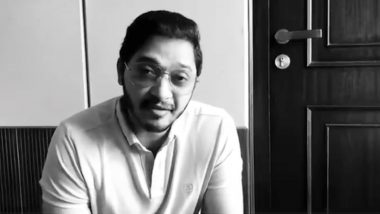 Shreyas Talpade regales the audience with perfect comic timing on screen, and his brand of entertainment has always reached out to the entire family -- evident in the Golmaal films, Housefull2, Om Shanti Om or Apna Sapna Money Money. Shreyas, who ventured into producing plays a while back with Nine Rasa, his OTT platform for theatre, says he is focussed on bringing clean family content to the unique theatre streaming platform. Shreyas Talpade’s OTT Platform ‘Nine Rasa’ To Generate Revenue To Aid Theatre Artists.

"I want families to sit together on weekends and watch plays on Nine Rasa. I don't want them to cringe when they watch the content. Plays have always been a family kind of content. We have tried to maintain that. We are trying to keep the sanctity intact. We cannot have any obscene content or cuss words in these theatrical performances. I want families to just relax and enjoy the content," Shreyas told IANS. Teen Do Paanch: Lyricist Amitabh S Verma Opens Up About Directing Shreyas Talpade, Bidita Bag’s Web Show.

His roles on the big screen reflect his philosophy when it comes to choosing content. "Personally, I am not in favour of cuss words. Even in films, I only use them when I am really asked by my director. Otherwise, I try and avoid it. For Nina Rasa, we tell the scriptwriters to ideally avoid such words. If they really want to use it, we tell them to use a generic word. If it's really required then we come out with the disclaimer that it is meant for 18-plus audience," he said.

Presently Shreyas' OTT platform has 12 plays streaming including "Pashmina", "Aarush Marush", "Saheb Ji Darling" and "Paul" among Hindi, Marathi and Gujarati plays. In the future, the app will introduce other languages like Bengali, Telugu and Malayalam plays. About three plays are uploaded every month along with the play's audio podcast. Incidentally, Shreyas was a theatre artiste before joining films, and he left theatre 17 years back for better prospects in films.

"The last time I was part of a play was in 2004. I acted in an English play titled 'Anything Called Love', an adaption of a Marathi play. After that, I got my first film, 'Iqbal' and my journey in films began," said Shreyas. The actor misses theatre and is geared up to face the stage lights again with his own production. "I am excited about getting back to the stage. I would very soon be a part of Nine Rasa. We are looking for a script where I can be a part of. I guess people prefer me doing a little bit of comedy, so I will be doing something in that format," he informed.

Shreyas started Nine Rasa to help the theatre community. "It all started in the pandemic to help the theatre community. I started working on the idea in May 2019 and launched it on April 9, 2020. There are times like the pandemic that actually push you out of your comfort zone and make you realise there is a lot more than you can actually do. It's not only about giving money or food to the artistes. Every artiste wants to eventually perform and learn. I realised that when everything is going digital, then why not theatre?" said Shreyas.

All the content created for this app is original. Shreyas plans to have a similar kind of ecosystem for online theatre as OTT web series and films. He informed: "We want people to have a brand-new experience. Hence, we are curating content and shooting it, too. Going forward, the plan is to have international content as well."

He added: "It's exactly like any other OTT platform. We call for scripts and shortlist them, and then commission those projects to producers. They have to set up the entire play and bring it to our auditorium to shoot. Right now, we have taken the responsibility of shooting the plays because we wanted a template. We do post-production on it as a film and then upload it. In future we will commission the shooting part."

Shreyas strongly believes every medium has its own space, be it OTT or cinema halls. "OTT is never going to die. It has become an addiction. The movie theatre has its own magic. It's a celebration of sorts for people on weekends to go and watch movies. The theatres need to open and there has to be some kind of normalcy in terms of entertainment," he said.

He doesn't have any OTT projects, he informed, adding: "There are a couple of offers, but I am still considering them." His film roster, though, is full. "Rohit Shetty's 'Golmaal 5' shooting was planned for this year, but because of the pandemic it has been pushed further. My next release would be 'Manu Aur Munni Ki Shaadi' and Mahesh Manjrekar's Marathi love story 'Mrigtrishna'," signed off Shreyas.

(The above story first appeared on LatestLY on Jul 16, 2021 09:31 PM IST. For more news and updates on politics, world, sports, entertainment and lifestyle, log on to our website latestly.com).