On the work front, Shriya is on a roll with exciting projects. She will be seen in Crackdown Season 2, The Gone Game Season 2, film Ishq-E-Nadaan to name a few. 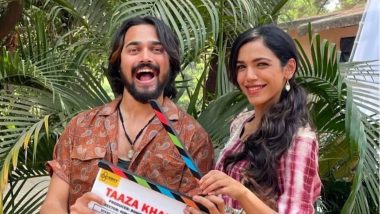 Actress Shriya Pilgaonkar has wrapped up shoot for the comedy-drama Taaza Khabar, which also stars Bhuvan Bam, J D Chakravarthy, Deven Bhojani, Prathmesh Parab, Nitya Mathur and Shilpa Shukla. Shriya will be seen in the role of a sex worker in the upcoming comedy-drama series. The Broken News: Shriya Pilgaonkar Shares Pics With Jaideep Ahlawat And Pens A Sweet Note For Her Co-Star.

On wrapping up the show, Shriya says, "Shooting for Taaza Khabar has been a super fun experience. I love comedy - dramas and it's a genre I haven't really done. I play a sex worker." "My character and look are completely different from what I've done which made this process even more fulfilling. I've loved working with Bhuvan and this entire cast and crew who are so talented and hardworking. We've had a blast shooting for this and I can't wait for the audience to watch it." Taaza Khabar: Comedian Bhuvan Bam All Set To Make His OTT Debut With Disney+ Hotstar’s Show!

On the work front, Shriya is on a roll with exciting projects. She will be seen in Crackdown Season 2, The Gone Game Season 2, film Ishq-E-Nadaan to name a few.

(The above story first appeared on LatestLY on Jul 07, 2022 05:02 PM IST. For more news and updates on politics, world, sports, entertainment and lifestyle, log on to our website latestly.com).