Tejasswi Prakash has won Salman Khan's Bigg Boss 15 beating Pratik Sehajpal and Karan Kundrra. Here's everything you need to know about the BB 15 winner. A must read! 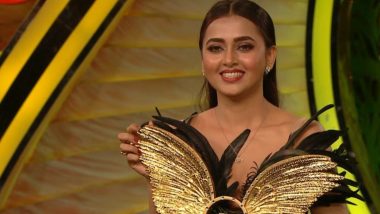 Tejasswi Prakash has won Salman Khan hosted reality show Bigg Boss 15. The 29-year-old actress is a popular name in the television industry and played the game of BB 15 with a lot of determination. She is best known for playing the lead role of Ragini Maheshwari in Swaragini - Jodein Rishton Ke Sur. Prakash has also been a part of Fear Factor: Khatron Ke Khiladi 10. To note, while she was completing her graduation she took part in Mumbai's Fresh Face contest. Teja hails from Mumbai. Tejasswi Prakash Wins Bigg Boss 15; Fans of the Naagin 6 Actress Shower Congratulations On Her Victory!

Talking about her TV journey, she got immense popularity when she appeared in the serial Sanskaar - Dharohar Apnon Ki in 2013. Later, she appeared in other TV shows like Pehredaar Piya Ki, Karn Sangini, Silsila Badalte Rishton Ka, and Rishta Likhenge Hum Naya, etc. FYI, Prakash for four years did her training in Indian classical music. Also, there is no such controversy attached to her name as of yet. Bigg Boss 14 Grand Finale: Tejasswi Prakash Lifts the Winner’s Trophy, Beats Pratik Sehajpal.

Congratulations #TejaTroops wo worked all the days and Nights for #Tejasswi

and #Tejran Fans who voted for #TejasswiPrakash or both Contestants

Victory belongs to You, U have done what no other fandom could do. pic.twitter.com/kF0GUoe0I7

Lastly, if we talk about her love affair, after Tejasswi Prakash and Shivin Narang starred in a music video, Sunn Zara, rumours of them dating each other started to do rounds. And well in Bigg Boss 15, we all know she has finally found love in Karan Kundrra.

Meanwhile, the TV actress is born and brought up in a musical family. She is an engineer by profession and loves dancing, singing, and street food.  While Teja emerged as the winner of Bigg Boss 15, it is Pratik Sehajpal who finished at the second spot followed by Karan Kundrra at number three.

(The above story first appeared on LatestLY on Oct 01, 2021 07:08 PM IST. For more news and updates on politics, world, sports, entertainment and lifestyle, log on to our website latestly.com).