The Kapil Sharma Show first premiered on April 23, 2016 and wrapped up its third season on June 5 2022 as the team heads for a tour to the US. India's Laughter Champion will replace The Kapil Sharma Show, with the panel of judges being Shekhar Suman and Archana Puran Singh. 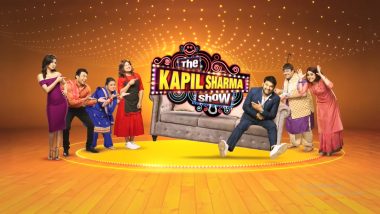 Popular stand-up comedy series The Kapil Sharma Show has taken a short break as the host Kapil Sharma and his team are heading to the US on a professional tour. The show that premiered on April 23, 2016 had so far seen three seasons with the third season wrapped up on June 5. The Kapil Sharma Show: Shikhar Dhawan Plays Flute, Prithvi Shaw Flaunts His Rapping Skills on Sony TV’s Reality Show.

It started with Kapil and his team of comedians, including Kiku Sharda, Sunil Grover, Sumona Chakravarti, Chandan Prabhakar and Ali Asgar. The show has entertained the audience with the fun banter between Kapil and Bollywood celebrities, who usually visit the show to promote their latest film.

The Kapil Sharma Show saw Shah Rukh Khan as the first guest in 2016, who came to promote his film Fan. Later many celebs such as Shraddha Kapoor, Tiger Shroff, Yo Yo Honey Singh, Akshay Kumar, Ajay Devgan, Yami Gautam, Virender Sehwag, Dharmendra and many such names have visited the show as special guests.

Navjot Singh Sidhu used to be on the show as a permanent house guest but later Archana Puran Singh replaced him on the show. In fact Sunil Grover also left the show after some differences with the host.

During the finale episode, viewers got to see veteran actor Kamal Haasan, who came to promote his film Vikram and also in a conversation talked about the technology that was used behind the making of Appu Raja.

Kapil asked Kamal why had not visited the show for many years and he replied that he had not been doing movies for many years because he was busy with politics. The host also told Kamal that he is a big fan of him and asked him why he got into politics. He also said while actors work with their hearts whereas politicians work with their minds. However, Kamal opposed his viewpoint.

Later, Kapil teased Kamal by saying that he ventured into the Hindi film industry with Ek Duuje Ke Liye in 1981. Kapil recalled how Kamal looked at that time and how he had changed. "When I saw you before, you had only a moustache, now you have a full sleeve beard," he laughed.

While actress Neetu Kapoor also graced the show and in a fun banter with the host, she spoke about JuggJugg Jeeyo opposite Anil Kapoor along with Varun Dhawan, Kiara Advani, Maniesh Paul and Prajakta Koli.

Talking about Anil Kapoor who plays her husband in the film, Neetu revealed his mischievous nature. She shared: "He is very mischievous, Anil is the naughtiest ever. When we had our first shot together, the muhurat shot, he told everybody to come and touch my feet. I said, 'I am not the oldest, you are older than me!'."

"He is two years older than me. I asked him, 'how are you asking them to touch my feet?'. He said, 'you came on the screen before me and thus, you are older than me'."

On the other hand, Varun Dhawan spoke about how his co-star Kiara Advani is a lucky charm for the film. Varun said: "I believe that Kiara is a lucky charm. All her films are a success and super-duper hits. She is talented obviously, but luck is a really big factor especially in our industry."

The actor also spoke about why he signed on to JuggJugg Jeeyo: "I think during the lockdown period, we are all introspective on what we want out of life. I also thought about the kind of films I want to do, the legacy I want to create. So, during that time, I signed two films." The Kapil Sharma Show: Sunny Leone Shares Her Experience of Being a Mother on the Show.

"One is Jugg Jugg Jeeyo and the other is Bhediya, both of which are really close to my heart. I feel these films will bring something new to the viewers. Thus, these films are very thoughtful ones and let's see how far they go." India's Laughter Champion is all set to replace The Kapil Sharma Show with Shekhar Suman and Archana Puran Singh on the panel of judges.

(The above story first appeared on LatestLY on Jun 06, 2022 04:59 PM IST. For more news and updates on politics, world, sports, entertainment and lifestyle, log on to our website latestly.com).