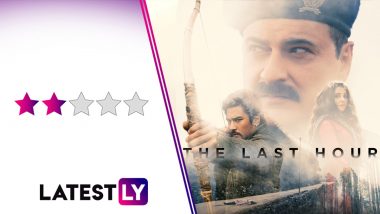 The Last Hour Review: The serene valleys of Sikkim is rocked by the rape and murder of an actress. Recently transferred cop Arup Singh (Sanjay Kapoor) is investigating the murder and the search leads him to Dev (Karma Takapa), a Shaman who can revisit a deceased's last moments and help them get to the final journey by going into the great beyond. The Last Hour: Shahana Goswami Says She Is Thrilled To Play a Police Officer in the Upcoming Amazon Prime Video's Series.

Using Dev's supernatural skills, Arup tries to investigate the murder of the actress, only to realise that she only happens to be collateral damage. Meanwhile his daughter Pari (Shaylee Krishen), who hasn't got traumatised over the accidental death of her mother (Raima Sen), keeps hearing voices in her head that is making her suicidal. Dev forms a connection with her, that puts her in further danger, even though he is unable to resist visiting her in his post-life transgressions.

The Last Hour, created by Amit Kumar and Anupama Minz, is a show that is replete with fantasy elements. From a person who can see the future or go into a dead person's last moments, from killer shamans to talks of time travel to dead walking spirits, this is a series that has all the potential to be an absolute talking point in Indian OTT series. Oh wait, I simply forgot the existence of Sasural Simar Ka and Naagin... My bad. So yeah, the fantasy elements might be nothing new, but yeah, it isn't cheesy. Why, we even have a character named Loki!

It is also one of the rare opportunities for an Indian show to explore the North-Eastern territory of the country and delve into the mythical elements Sikkim has to offer. But then we also have a joke on people there eating snakes and dog eyes, and the Punjabi lead commenting on how people there look the same. Well, what's a Hindi show without a few racist comments, right?

I wish, however, those racist overtones was most of The Last Hour's problems. The fantasy-meets-murder mystery plot has in it to keep you intrigued and some of the imagery are quite haunting. If only the makers had kept a control on the plentiful of continuity errors and timeline issues, The Last Hour would have been less confusing that it intends to be. The slow pacing and the dull tone that the show strangely adopt can't do much to keep your attention from ebbing away. The action sequences leave a lot to be desired and the VFX is very patchy. The Last Hour: Raima Sen Recalls Giving a Screen Test for Her Role in the Upcoming Amazon Prime Video's Series.

Even the performances come across as a mixed bad, with some of the lead actors coming across as way too restrained (a polite way of saying that they underacted!). The only actor that left an fine impression was Robin Tamang who plays the dangerous Yama Nadu.

- The Performances Are Not Upto To Mark

No amount of magical hokum could have helped The Last Hour because it needed better performances, a tighter screenplay and even tighter pacing. The series is streaming on Amazon Prime Video.

(The above story first appeared on LatestLY on May 15, 2021 08:37 PM IST. For more news and updates on politics, world, sports, entertainment and lifestyle, log on to our website latestly.com).