The Night Manager Actress Tilotama Shome Reveals She Hasn't Seen the Original British Version of the Series, Here’s Why!

The show, which sees Aditya Roy Kapur in titular role and Anil Kapoor as an arms dealer, follows the story of trust, betrayal and infiltration. 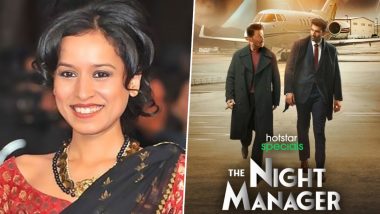 Tilotama Shome, who's awaiting the release of her upcoming streaming show The Night Manager, hasnt seen the original British version of the series. The show, which sees Aditya Roy Kapur in titular role and Anil Kapoor as an arms dealer, follows the story of trust, betrayal and infiltration. Shome, who essays a gripping character in the series originally portrayed by Olivia Colman, decided to skip watching the original in order to give her own touch to the character. Anil Kapoor Heaps Praises on The Night Manager Co-Star Sobhita Dhulipala.

She said: "Olivia Colman is simply fantastic, starting from her early work, notably 'Tyrannosaurus'. I am a massive fan.It would be impossible to unsee what she has done. Besides, India has its own rhythm, especially in the characterization of someone who works for the government." The Night Manager Trailer Out! Aditya Roy Kapur and Anil Kapoor Play Some Dangerous Games in the Spy Flick (Watch Video).

She added, "So I chose to just stick to the script and bring her alive. And hope and pray that Olivia Colman (if she watches it), does not hate me for it."The  Night Manager has been produced by The Ink Factory and Banijay Asia. The series will drop on the OTT platform Disney+ Hotstar on February 17.

(The above story first appeared on LatestLY on Jan 23, 2023 11:28 PM IST. For more news and updates on politics, world, sports, entertainment and lifestyle, log on to our website latestly.com).