Vidyut Jammwal’s Khuda Hafiz Co-Star Aahana Kumra on Being Sidelined From Disney+Hotstar's Virtual Conference, Says ‘Self-Made People Too Deserved to Be on This Panel’

In an interview, Vidyut Jammwal's Khuda Hafiz co-star Aahana Kumra has expressed her distaste over not being invited for Hotstar's virtual conference. Check it out. 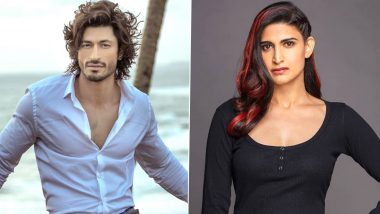 On Monday, Bollywood stars like Akshay Kumar, Ajay Devgn, Alia Bhatt, Varun Dhawan and Abhishek Bachchan gathered virtually in an initiative by Disney+Hotstar to announce their upcoming films coming straight away on the OTT platform. However, the disappointing part was that even after being part of the seven films releasing on Hotstar, the star cast of Vidyut Jammwal's Khuda Hafiz and Kunal Kemmu's Lootcase were uninvited at the online event. This behaviour irked the action star and via a tweet, Jammwal lashed out by saying 'The cycle continues.' Now, in an interview with Mid-day, Vidyut's co-star from Khuda Hafiz, Aahana Kumra has also expressed her distaste over the same. Vidyut Jammwal Calls Out Bollywood and Disney+ Hotstar For Snubbing His Movie Khuda Hafiz, Says 'The Cycle Continues' Hinting at Nepotism (View Tweet).

"I found out about the press conference after seeing Vidyut's tweet. I have not bothered asking why I wasn't informed. I know it won't lead to an answer," she said to the portal. Further, Kumra who is not new to the OTT world slammed the streaming giant for being biased. "The OTT platforms I have worked with have been warm, professional and democratic in how they present you. They pride themselves in equal representation. This is the first time I have seen such behaviour." she added.

Post the death of Sushant Singh Rajput, 'nepotism', as well as the 'insider-outsider' debate has gained momentum online. Emphasising on how even self-made stars should be given their due. Aahana said, "Vidyut is an outsider who has made it on merit. We must support such talent considering it's difficult to crack the industry in today's times. Self-made people too deserved to be on this panel. We all should have been part of it." Varun Dhawan Promotes Vidyut Jammwal's Khuda Haafiz and Kunal Kemmu's Lootcase After Disney+ Hotstar Fails To Invite Actors To Press Conference.

Helmed by Faruk Kabir, Khuda Haafiz is a romantic thriller starring Vidyut Jammwal and Shivaleeka Oberoi in leads. Reportedly, the movie is said to be inspired by some real-life incidents. Stay tuned!

(The above story first appeared on LatestLY on Jun 30, 2020 09:35 AM IST. For more news and updates on politics, world, sports, entertainment and lifestyle, log on to our website latestly.com).