WandaVision is the first series in Phase Four of the Marvel Cinematic Universe and it consists of six episodes. Captain Marvel and Black Widow writer Jac Schaeffer has penned the show. 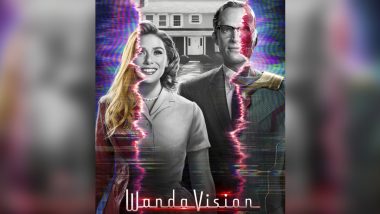 WandaVision, the miniseries which will feature Elizabeth Olsen as Wanda Maximoff aka The Avengers’ Scarlet Witch and Paul Bettany as Vision has been drawing quite some attention since its announcement. This series will pick up from after the events of Avengers: Endgame and we will get to see two super-powered beings as the unusual couple going out about their routine lives. The series is just a few days away from its release online and the early reviews for the same look pretty promising. WandaVision Trailer: Did You Notice This Captain Marvel Character in the First Promo of MCU's Disney+ Hotstar Series?

A few lucky Marvel Cinematic Universe fans got a chance to see WandaVision days before its release. They thoroughly enjoyed it and have taken it to Twitter to share their experience of watching this miniseries. While one of them said that Elizabeth deserves all the Emmay nominations for her work in the series, another said that the show is exactly what the audience is expecting it to be. The reviews reveal that the show is 'funny, clever, creepy, and above all, sort of tragic'.

ALL THE EMMYS FOR ELIZABETH OLSEN IN #WandaVision pic.twitter.com/YIzfsQBcxf

I got to see the first three episodes of #WandaVision and it was everything I hoped it would be: funny, clever, creepy, and above all, sort of tragic.

The reality is: WandaVision is taking the Marvel Cinematic Universe places it has never gone before, and there's no going back. pic.twitter.com/BzNujPcUtP

Watched 3 episodes of #WandaVision and the show is weird as hell (in a good way).

Two things are clear. 1) Marvel is dedicated to parodying classic sitcoms and 2) the MCU is finally back!

Can’t wait to see how this show sets up Doctor Strange 2 and Spider-Man 3 👀 pic.twitter.com/nR6rTShfOY

I’ve watched THREE episodes of #WandaVision and have thoroughly enjoyed it. Truly unlike anything Marvel Studios has done — it’s light, funny & fully committed to its retro sitcom inspirations, but it also carefully sprinkles in enough mystery & intrigue to keep you guessing pic.twitter.com/8dqegsg5By

It’s so different from what has come before (in a way that works) that I wonder if people looking for an action-packed romp are going to love it out of the gate.

I love it through 3 episodes. pic.twitter.com/3NTj9Cn8An

#WandaVision is truly unlike anything the MCU has put out before. I can’t emphasize that enough.

It is a blast to watch. It is so committed to the sitcom structure of story telling that it feels like a bold risk - but it pays off and builds a mystery.

Have seen the first 3 episodes of #Wandavision and *LOVE* how big of a swing @MarvelStudios is taking with the series. The reason the #MCU is king of the hill is @Kevfeige’s amazing leadership and willingness to take risks like what you'll see in 'Wandavision'. pic.twitter.com/EgUUUxXudh

Talking about the show, Matt Shakman, the director of WandaVision had said, "It's an honour, and it's terrifying. And it is surreal, like everything else (right now). The fact that we are the first MCU property to come out since Endgame, I never could have fathomed that when we first started working on this project... but it is a wonderful way to start Marvel's work in the streaming world." WandaVision: Paul Bettany Answers THIS Million Dollar Question about Vision's Penis and You Don't Want to Miss Reading That!

WandaVision is the first series in Phase Four of the Marvel Cinematic Universe and it consists of six episodes. Captain Marvel and Black Widow writer Jac Schaeffer has penned the show. The cast also features actors Kathryn Hahn, Debra Jo Rupp, Teyonah Parris and Fred Melamed. WandaVision is all set to be premiered on Disney+ on January 15, 2021.

(The above story first appeared on LatestLY on Jan 12, 2021 07:13 PM IST. For more news and updates on politics, world, sports, entertainment and lifestyle, log on to our website latestly.com).