The detentions were made in connection to the Class 10th Mathematics paper leak. 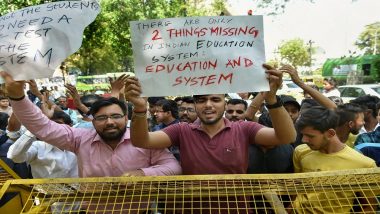 Protests in Delhi against the CBSE paper leaks, which has caused great inconvenience to the students, (Image/FilePTI)

Ranchi, Mar 30: The Jharkhand Police on Friday claimed it has detained a coaching centre owner, along with six others, in connection to the CBSE paper leak.

The accused were taken into custody from Chatra district, said Superintendent of Police Akhilesh B Verior, adding that further probe is currently underway.

The detentions were made in connection to the Class 10th Mathematics paper leak.

While speaking to reporters, the SP said an inter-state racket is suspected as the group taken into custody received WhatsApp images of the leaked paper from neighbouring Bihar and Delhi.

An investigating team has also been dispatched to Bihar, the police official said.

"We had detained a few students and the owner of a coaching centre and have got breakthroughs. Some of them are still under detention. We should be in a better position to disclose all the details in next 24 hours," the SP told HT.

Meanwhile, protests continued in the national capital region against the CBSE and the government over the lack of security which led to the paper leaks.

The Opposition has demanded Prime Minister Narendra Modi to break his silence on the issue and "fix accountability".

The CBSE, on Wednesday, announced it would be conducting re-examination of the Class 10th Mathematics paper and Class 12th Economic paper. The decision will affect over 20 lakh students across the nation who appeared for the exams.

The re-examination dates are expected to be declared on either Monday or Tuesday.

Addressing the press on Thursday, HRD Minister Prakash Javadekar said he could "feel the pain of parents" as he is one among them, further adding that he has lost his sleep after the paper leak came to light.

Delhi Police, which is probing the scandal, has registered two separate cases and rounded up over at least individuals. 10 suspicious WhatsApp groups have also been identified with 50-60 members each. No arrests have, however, been made so far.

(The above story first appeared on LatestLY on Mar 30, 2018 05:23 PM IST. For more news and updates on politics, world, sports, entertainment and lifestyle, log on to our website latestly.com).