The death toll in the Dongri building collapse has risen to 14, and many are still feared to be trapped inside. The building was 100-years-old and was classified as C1' and was supposed to have been demolished immediately. 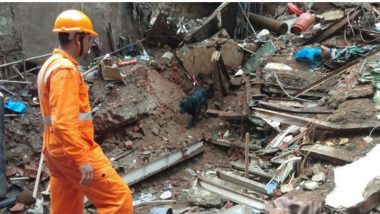 Mumbai, July 15: In a tragic incident on Tuesday, a four-storey-building collapsed in the Dongri area of Mumbai. According to the latest ANI update, the death toll in the incident has shot to 14 and search operation is underway to rescue those trapped inside the debris. The National Disaster Response Force (NDRF) is carrying out search operation with the help of sniffer dogs, at Kesarbhai building collapse site. Dongri Building Collapse: Building Was 100 Years Old, Focus On Rescuing 15 Trapped Families, Says Maharashtra CM Devendra Fadnavis.

Hours after the collapse took place, news came out that Brihanmumbai Municipal Corporation (BMC) had declared the building as unsafe in 2017 and had ordered its immediate evacuation. Dongri Building Collapse: BMC Issued Notice For Immediate Demolition of 'Kesarbai' in 2017, MHADA Blames Builder.

The Maharashtra Housing and Area Development Authority (MHADA) also said the 'Kesarbai' building, which collapsed, was supposed to have been demolished in 2012.

BMC had stated in the notice that the structure was classified as 'C1' and was supposed to have been demolished immediately. "In the event of any mishap, this office won't be responsible." However, no heed was paid to it and people continued to stay in the building and the builder also never executed the redevelopment work.

(The above story first appeared on LatestLY on Jul 17, 2019 08:03 AM IST. For more news and updates on politics, world, sports, entertainment and lifestyle, log on to our website latestly.com).