The state education minister, Krishna Nandan Prasad Verma is expected to release the Bihar Board 10th results from the headquarter at Patna. 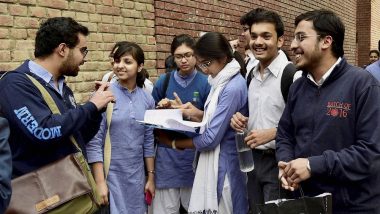 The Bihar Board class 10 board results 2018 had been delayed and the Bihar School Examination Board (BSEB) will announce the Matric results tomorrow, June 26. Once released, all the students can check their scores online from the official websites of BSEB; biharboardonline.bihar.gov.in, bsbssresult.com, biharboardonline.in. The state education minister, Krishna Nandan Prasad Verma is expected to release the Bihar Board 10th results from the headquarter at Patna. However, officials have not yet stated the results declaration time while few media reports are speculating to be out at 11:30 am.

This year, the BSEB class 10 examinations began from February 21 to February 28. Above 17.70 lakh students sat for the exams at 1,426 centres across the state. Earlier the matric results were scheduled to be announced on June 21, but the delay came in the wake of over 42,400 answer sheets going missing from a school in Gopalganj. A bag that contained bundles of class 10th answer sheets were not found just a day before the results announcement from SS Balika Inter School. Soon the BSEB chairman Anand Kishore conducted an emergency press conference and came down with a decision to announce the results on June 26.

He further stated that the evaluation process is over, and marks have been allotted so the missing answer sheets will not affect the results. But issues might arise in case any students not satisfied with the marks and apply for re-checking. It is third year in a row that irregularity in evaluation process has been observed. Apart from the official website; class 10 students can check their marks from the other third-party sites such as indiaresults.com, examresults.net using their roll number as given in the admit card.

(The above story first appeared on LatestLY on Jun 25, 2018 09:19 AM IST. For more news and updates on politics, world, sports, entertainment and lifestyle, log on to our website latestly.com).